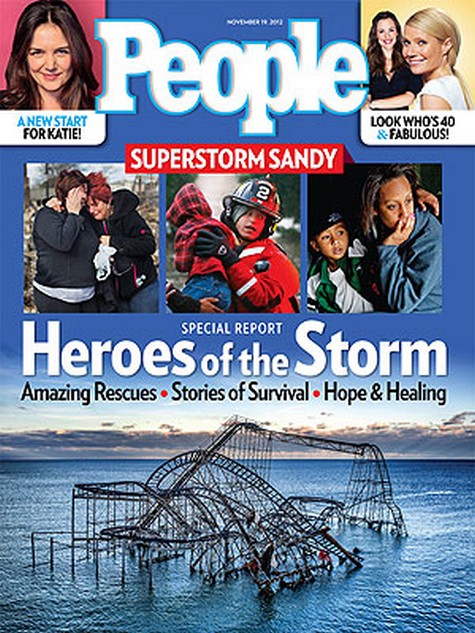 I’m sure the nation feels as if we’ve been bombarded with a good amount of heartbreaking stories that came out following the aftermath of Hurricane Sandy. Seaside Heights of New Jersey destroyed. The flooding of New York’s subway stations. About 80 homes in Queens, New York burnt to the ground. Over 100 people who’ve lost their lives.

Hurricane Sandy (or Superstorm Sandy-dubbed by the media) was described by New York Mayor Bloomberg as “a storm of unprecedented proportions,” and the mayor also tweeted “maybe the worst #NYC has ever experienced.”

But despite all this bad news, People magazine has decided this week to put on its cover, inspirational stories of the heroes and ordinary people helping each other out. The mag is full of stories of good Samaritans and happyng endings that despite the destruction and sadness of Superstorm Sandy, have been prevalent.

Instead of giving up, charge nurse Lori Touchette and other nurses, safely evacuated four tiny premature babies down fifteen flights of wet and dangerous stairs, manually pushing air into their little lungs with a hand-held pump. Touchette quotes to People:

“It was a harrowing experience,” she says. “Everybody in the hospital came together.”

In Seaside Heights, N.J., mother of three Vickie Rietheimer, heard screams for help after water crashed through her neighborhood and saw her neighbors barely holding on to a fence as water surged around them.

“We opened the door,” she says, “and got them inside our apartment.” No doubt that day, Rietheimer saved her neighbors from getting swept up into the sea.

The job of Ralph Verdi as police chief of Little Ferry, New Jersey, is a heavy one. When not fighting crime and keeping residents safe, it is to make sure residents listen to warnings when harrowing weather approaches, which is to usually evacuate. But a lot of people ignore the warnings, either because of fear, financial detriments, or just plain stubbornness. After seeing the destruction of what Hurricane Sandy left, as well as trapped residents in their homes, Verdi and rescuers leaped into action.

Verdi’s job became the rescue of residents trapped in the top floors and roofs of their homes by 6-feet-deep water. Many of those trapped were young families and the elderly. People were evacuated either by boat, truck or bus to a local shelter, because a lot of personal cars had already succumbed to being surmerged by water.

And the most public display of celebrities coming together for a good cause was the broadcast of NBC’s live benefit concert, Hurricane Sandy: Coming Together, on Friday, Nov. 2. Celebrities like Tina Fey, Whoopi Goldberg and Kevin Bacon urged Americans to give, while artists like Christina Aguilera, Bruce Springsteen and New Jersey natives, Bon Jon Jovi performed. The telethon raised over 23 million going to the Red Cross to help victims of Hurricane Sandy.