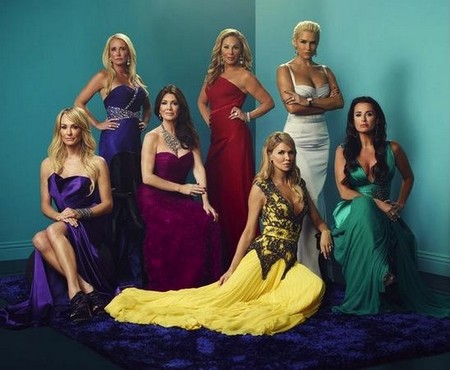 Are you ready for a brand spankin’ new season of The Real Housewive’s of Beverly Hill’s?  Well, I sure am and the fun will be coming to Bravo beginning on November 5th.  This season’s cast features a few new faces joining the ladies. Brandi Glanville has officially signed on the dotted line as an official replacement for Camille Grammar and just think about it, they were filming as Brandi’s most hated enemy (current wife of Brandi’s ex, Eddie Cibrian), LeAnn Rimes went a little bit crazy. Brandi isn’t one to keep her mouth shut either; she’s just missing a filter so I can hardly wait to hear what she has to say.

New to the cast is itty bitty Marisa Zanuck who is married into the family that c-owns 20th Century Fox. Yep she is old Hollywood money in heels. She is also a prominent Hollywood real estate agent with ties to the Hilton family. Yolanda Hadid is also perfecting her table flipping, drink throwing skills and joining the housewife family. She’s a dutch model and interior designer that just so happens to be married to David Foster.

Returning for another go-round are sisters, Kim and Kyle Richards. If you remember, Kim is the walking poster child for your brain on drugs (and booze). Last time we saw her she had just returned from rehab after an entire season of erratic behavior caught on camera. It’s rumored that Kim has tripped from the straight and narrow path once again so we’ll have to tune in and judge for ourselves.  Kyle is Kim’s nagging sister. She knows Kim is a train wreck and seems to foolishly believe that she can bully her into straightening her life out. In between keeping close tabs on Kim, Kyle has a hot husband and a pile of little girls to care for. She also does splits on camera whenever an opportunity arises. I guess we’re supposed to be impressed?

Also back is Taylor Armstrong who is rumored to have embraced one hell of a drinking problem that Bravo’s film crews have repeatedly filmed. They’ve also complained about not getting great footage of the other ladies because drunken Taylor ruins the scenes. A drunk is only amusing for so long, even on camera. Taylor’s not the only one on shaky ground though, as the usually solid Adrienne Maloof is going through a particularly ugly split with her husband Paul Maloof. I’m not yet sure how much of that drama will unfold before the camera’s but at the very least we’ll watch her troubled marriage winding down.

Thank god there is one rock in the bunch and as usual, it’s Lisa Vanderpump. Always classy, always the voice of reason and it appears that her life is as consistent as ever. It’s a good thing because these ladies are going to need someone to confide in!

Will you be tuning in on Nov. 5th as the ladies return? Who is your favorite returning housewife? Tell us in the comments below!