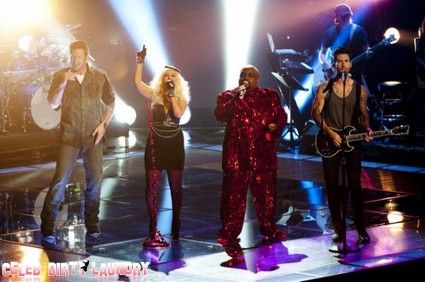 Season 2 of The Voice kicks off tonight right after the Super Bowl on NBC.  Stand by as we live blog the premiere for you with all the up-to-the-minute details!  In the  season two premiere, the “blind auditions” are held in front of the celebrity panel of coaches including, Christina Aguilera, Adam Levine, Cee Lo Green and Blake Shelton, who each hand pick 12 vocalists for their individual teams.

The strongest vocalists from across the country compete to be selected by one of the coaches and fight for a chance to win the title of being named “The Voice.” Christina Milian (“Be Cool”) joins as Social Media Correspondent and Carson Daly (“Last Call with Carson Daly”) hosts.

If you have not watched the show before it all starts with the Blind Auditions.  During the blind auditions the judges do not see the contestants – all decisions are made by hearing their voice and not seeing them.  If a judge likes a contestants voice he presses a button to select the contestant. for his team.  If more than one judge chooses the contestant it is the contestant who makes the decision of which team to be on.

Once the audition phase is finished the judges work with their teams and pass on the knowledge of their success in the battle round.   Team members will face off against each other and the judges will decide which team member moves ahead.  At the end of the battle episodes the strongest members will move ahead to the live performance shows.  The person who wins the voice will win $100,000 and a recording contract.

It all goes down tonight right after the Super Bowl and we will be live blogging the show with all the up-to-the-minute results.  So make sure to come back to this spot and spend the evening with us.  Refresh often to get the most current results!

TONIGHT’S SHOW: The judges take their seats and the first contestant enters her name is:

Rae Lynn a 17 year old.  She sings Miranda Lambert’s Hell on Wheels.  Adam is the first to choose her followed closely by Blake Shelton.  Blake tells her he will make her a country star and Adam tells Raelynn she can be more than a Country star.  Blake agrees.  Raelynn tells Blake his wife is her inspiration.  No surprise who she is going to choose.  She finally choose to be on Blake’s team.

Jess Campbell, he sings A Song For You. Jesse is a single Dad.  Almost immediately Cee Lo Green chooses him, followed by Christina and Adam.   A couple of minutes later Blake turns around too.  All four judges pushed the button for Jesse. Blake congratulates him and tell shim it was awesome, it was great.  Christina says the competition is strong!  She tells him she is above and beyond her expectations.  Cee Lo tells him he sounded strong and touched him deep down.  Cee Lo tells him he is his brother.  Cee Lo tells him he picked him first.  Adam tells him he blew him away – he made it work last year he can make it work this year.  Jesse tells them he is humbled, he is having trouble making his mind up.  Jesse chooses Christina!

Adam makes a comment the talent on this show is F*!?ing Amazing – A crack at American Idol?

Daniel Rosa singing Animal.  None of the judges turn around.  The judges clap for him.  Christina tells him he is a beautiful singer and not to be upset.  Adam wishes him luck.  He asks them what he could have done better.  They tell him pitch.

Tony Lucca singing Trouble.  Adam presses the button for him followed bu Christina Aguilera and Blake Shelton.  Adam tells him he was immediately lifted out of his chair and he believes he will have an amazing career.  Cee Lo tells him he was great!  Christina tells him it takes a true talent to get them all to push the button.  She tells him he has a great voice.   Blake tells him what he loves about the show is that there is real professional talent on it.  Adam tells him for the record he pushed to buttons – he pushed Cee Lo’s too.  Adam begs him to choose him and Tony tells him it is hard to say no to someone who pushed the button twice.  Tony chooses to be on Adam’s team.  Adam tells the other judges he was good.

Christina remembers that he was on the Mickey Mouse show with him.  She walks out to see him and tells him she did not even recognize him.  She tells him no hard feelings and meets his family.

The first night of the blind auditions comes to an end.  Tomorrow night come back as we cover the 2 hr show.  Also tomorrow the four judges will perform Prince melodies.

What did you think of the show?  It is the first time I have seen the show and I loved it.  Sound out in the comments below and let us know your thoughts!