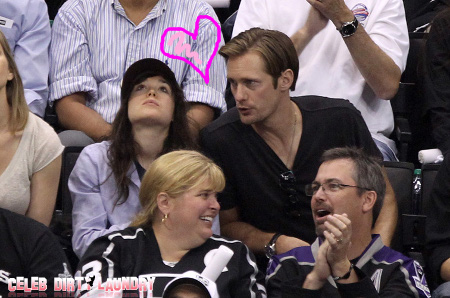 I smell something fishy going on here, and judging by the smiles on these two faces as they were spotted together coming out of the Stanley Cup Finals in LA, I’m inclined to say that there’s definitely some magic in the air.  Relaxed, happy, and looking like they know-something-we-certainly-don’t indeed.  And what a cute couple they make!  A cute couple certainly, but also a very surprising one to say the least. But I guess that’s the way it goes in Hollywood.

Alex hasn’t been linked to anyone really since breaking it off with Kate Bosworth and I can’t say I really know whom Ellen has been snuggling with — so why not.

So are the two just friends or is something more going on?  There were whispers that Ellen might be playing for the other team, but just because she doesn’t dress like every other girl in Hollywood doesn’t necessarily mean she’s into the ladies.

While the LA Kings didn’t win Game 4 of the finals, does this mean they will be turning up together for game 5?  So many questions . . . so little answers.  Just smooch already will ya! We know you’re in love.

Both actors have a lot happening for them, so perhaps this is a publicity stunt.  Alex has season five of True Blood premiering this Sunday while Ellen has an upcoming movie in postproduction coming out called The East.  Oh, wait, Alex is in it too. Dang, maybe they are just friends after all . . . .