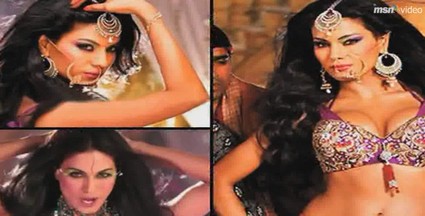 Veena Malik is now considered a supermodel as she takes her brave and outrageous behaviour to new levels, hitherto unseen in the Islamic world. For posing nude in FHM India and participating in a reality TV show in which she dates men and picks the sexiest one to marry, Veena received a Fatwa. To make matters even worse, the Pakistani celeb swears that she will marry if she meets Mr. Right on her upcoming Bachelorette style reality TV show – ‘Swayamvar-Veena ka Vivah.’

If Veena marries a man of her own choosing this will set an example for Muslim women that terrifies conservatives. The Pakistani actress already got into big trouble back home for posing nude for an Indian magazine. Pakistan and India exist in a perpetual state of hostility, often violent. Furthermore, Pakistan is strictly Islamic and woman do NOT appear in the nude. To make matters even more explosive, Malik appears in the controversial photos with ‘ISI’ tattooed on her arm – these are the initials which stand for Pakistan’s dreaded and hated spy agency, Inter Services Intelligence.  Many Indians and observers in the West consider the ISI to be responsible for terrorist attacks including the 2008 Mumbai massacre.

MORE: Pakistan Up In Arms Over Veena Malik’s Nude Poses IN FHM India(Photo)

Malik was roundly criticized in the Muslim world and in fact disowned by her own father for her brazen public sexuality. Her situation worsened considerably when The All India Muslim Festival (Tyohar) Committee in Bhopal issued a fatwa excommunicating Malik for “objectionable” photos and for showing disrespect for the sacred institution of marriage (nikah) by signing a contract to choose a groom herself on the reality TV show.

Indian Express reports:  Veena Malik has said that she would certainly get married on her upcoming reality show ‘Swayamvar-Veena ka Vivah’ if she finds her Mr Right among the contestants.  The Pakistani actress, who has always been mired in controversies, is currently working in Bollywood films ‘Mumbai 125 Kms’, ‘Dal Mein Kuch Kaala Hai’ and ‘Zindagi 50-50’.

“I truly hope that I find my Mr Right is ‘Swayamvar’ and I am sure that I will find him. And if I find any such person on the show, I will definitely go for marriage,” she said.

Malik is also quite upbeat about her item number ‘Channo’ in the film ‘Gali Gali Chor Hai’, which is said to have garnered her much attention.

“Channo was like…I mean….everybody was like, oh wow! The biggest thing about the song is my look, which was once carried by Helenji.  I think this is going to be a start for another era, in which different looks would be elaborated and applied. I was wearing 10 inches heels and an electric blouse. It’s very difficult to carry such clothes,” she added.

India Times explains about Veena being a Super Model:  After Kareena Kapoor’s ” Heroine”, it’s time for ‘Super Model’ Veena Malik. Post her much-hyped relationship with Ashmit Patel on reality show “Bigg Boss”, Veena is all set to romance Ashmit again, but this time on the silver screen.  And to top it all, the film is titled “Super Model”. As the name suggests, the movie will have Veena Malik portraying the main character.

As controversy’s favorite child, Veena’s life has also gone through many phases and controversies. And that’s the reason why director Navin Batra chose Veena for the lead role. “In real life, Veena has been a professional and successful model and actress across the border. She was the apt choice to play the lead in my film,” explains Batra.

“Her body language, style and poise are that of a super model. Many from the industry and media have endorsed this view. So, I didn’t have to think twice before roping in Veena. Shooting of the film will be done in Fiji, Australia and a few other scenic locations,” says Batra, throwing more light on the project.

Whatever Veena Malik does seems to wind up in a scandal. One thing about her is that she breaks the traditional mold of expected female behaviour in the Muslim world. What do you think of Veena Malik? Tell us in the comment section below.