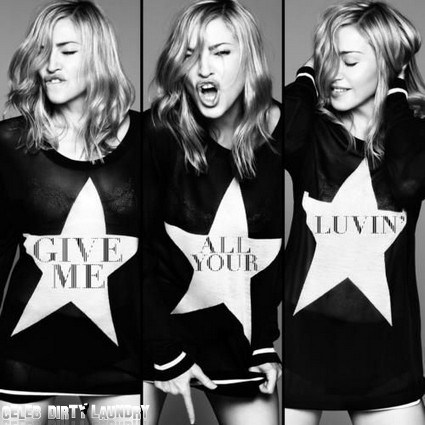 Get ready for a world first on American Idol this week. We’ll get our first look at Madonna‘s new music video ‘Give Me All Your Luvin‘. The first single from the much anticipated album MDNA will debut on the talent show on Thursday night.

The song was written by Madonna, DJ superstar Martin Solveig, Nicki Minaj and M.I.A. Nicky and M.I.A also feature in the clip which was shot in the US last month. Expect to see lots of cheerleaders! As luck would have it – or shrewd business savvy – the debut will come just hours before the single goes on sale.

Madonna is in full promotional swing. The cover art for the song has just been released. It shows Madge in black and white rocking out in an oversized sweater. The name of the song emblazoned across the 53 year old’s chest. Although she looks a lot younger than 53!

This week is all about Madonna! I mean she does have a new single and album to flog…I mean sell. On Sunday the Material Girl will perform the half time show at the Superbowl. She’ll have 12 minutes to show us why she’s a superstar and Lady Gaga is just a pretender. We’ll get a medley of hits and lots of famous faces. LMFAO and Cee Lo Green are among those joining her onstage. The day after she’ll appear on The Tonight Show with Jay Leno.

The promotional blitz is expected to continue through ’til March 26. What’s happening that day? That’s when her 12th studio album MDNA hits the shelves.