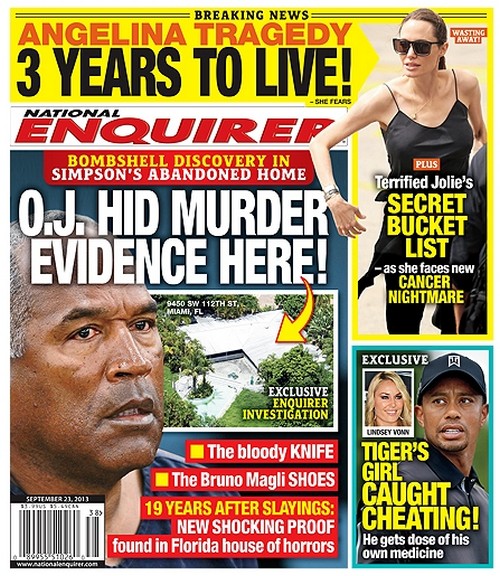 It has really been a rough year for Angelina Jolie hasn’t it? We already know that she has taken desperate measures to attempt to ensure that the same type of cancer that has ravaged other women in her family’s bodies doesn’t take hold of hers as well. First there was a double mastectomy and then Angie acknowledged that she expects to have a hysterectomy sooner rather than later as yet another preemptive move.

According to the Sept. 23rd print edition of The National Enquirer it may not actually be enough though. Apparently Angie is dealing with another scare connected to cancer that can easily cost her her life in a few short years. That means it is bucket list time and while marrying Brad Pitt many not top that list, it seems that having another baby does!

Also in the latest issue of National Enquirer they blow the lid off of items found hidden in O.J. Simpson’s abandoned Florida home. If he really did kill Nicole Brown Simpson and Ronald Goldman 19-years ago then the evidence has to be somewhere right? Well it looks like investigators have stumbled onto some interesting finds in Simpson’s old haunt!

I have to admit, I am pretty amused to hear that Lindsey Vonn was caught cheating on Tiger Woods! I wonder if he is actually hurt by her make out session with an older man backstage at a Justin Timberlake concert or if his ego is just wounded. Do you think that Tiger really is capable of caring deeply for anyone other than himself? Did Lindsey get him or will he just let this roll off his back because he has a harem on the side anyway? Tell us your thoughts in the comments below!