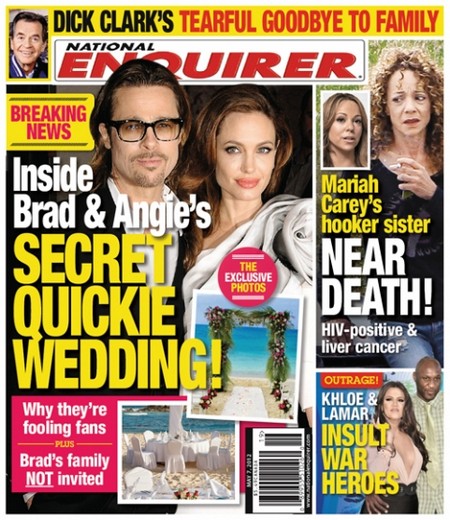 Just when we thought that Brad Pitt and Angelina Jolie were finally engaged we learn that they are in fact already married! Brad and Angelia had a quickie wedding and The Enquirer has the photos to prove it… or so they say. The cover of the current issue of The National Enquirer exposes the news that Brangelina are hiding for their fans – they are already married! The mag also claims to reveal why the couple are fooling their fans. Well they might be able to fool their fans but they can’t fool The Enquirer.

Also in the issue we learn about Mariah Carey’s hooker sister who is dying of liver cancer compounded with AIDS. Not a pretty picture. Why did one sister become a superstar while the other chose a life of crime?

According to the cover there is outrage over Khloe Kardashian and Lamar Odom heaping scorn on America’s war heroes. Why would the privileged couple, who have never done anything for anyone other themselves, insult our patriots? We will learn the truth within the covers of this week’s issue. Does Lamar think that he is better than people who fight for our country? Maybe he should try it.

William Levy and romantic missteps are also featured in this week’s issue according to the cover. What has the handsome hunk been up to now? Hopefully this will not lead to another scandal.

You will get to read about Neil Diamond’s prenup bombshell – what did the old snake try to pull now?  No surprise is that John Edwards facing a major criminal trial had a meltdown. What can he expect after all?  Former ‘90210’ Shannen Doherty is ready to be a mom – and isn’t that nice.

Do you believe that Angelina Jolie and Brad Pitt are already married? Let us know what you think in the comments below.