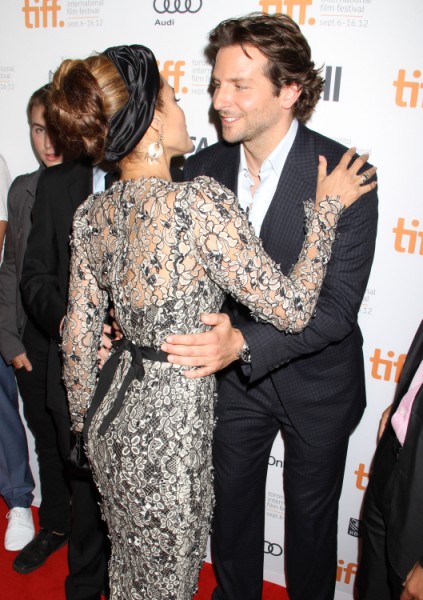 This is going to happen. It’s inevitable. The Hollywood Reporter just announced that Rachel McAdams is negotiating to star in the new untitled Cameron Crowe romantic comedy opposite Bradley Cooper and Emma Stone. This is the second movie she’s starred in with Bradley and they’re both single this time around. It’s going to happen. This movie is full of Ryan Gosling’s sloppy seconds isn’t it? Ryan starred with Emma in a couple and he just filmed The Place Beyond the Pines with Cooper. He AND Eva Mendes did. So that got me thinking in my gossipy way. Is Eva thinking what we’re thinking? Is A Cooper/McAdams relationship good for a Mendes/Gosling one? Did Eva take Bradley aside during recent promotions and say something like, “Oh, ya, you should totally get Rachel for that movie. She’s great in rom coms!” Knife. Twist.

Now, it’s not like Eva had to tell Bradley that. Again, they filmed Wedding Crashers together when Rachel was easily the bigger star and Bradley was just making his name in film out of television. He looked kinda nasty in that movie too so I’m sure there were no second looks while Rachel was firmly entrenched with Ryan. But now these two are a movie promoter’s wet dream and could help sell the film with an off screen relationship. Everyone knows Cooper will be game. He’ll date whoever his people tell him to which is why I don’t get the model he’s hanging with now – Suki what’s her name. That won’t last.

But will Rachel bite? That’s the hard one. She’s getting off a bad break-up with Michael Sheen so I’m not sure if she’s ready to jump into anything. But a McAdams/Cooper hook up looks sooooo good on paper. I’m calling it. It’s the right time for those two.  I still sorta have my doubts about Cooper’s intentions (he seems more like a social climber dater than anything else) but if Rachel gets on board, I will.

What do you think? Are Rachel McAdams and Bradley Cooper Hooking Up headlines inevitable?