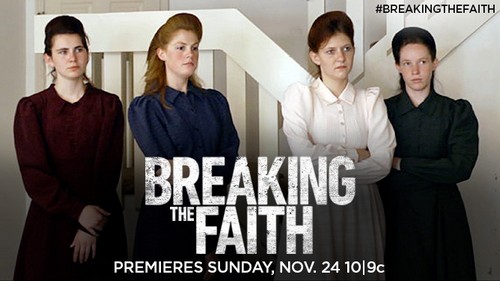 Tonight on TLC their newest docuseries, BREAKING THE FAITH, airs with its premiere episode called, “Keep Sweet.”  Breaking the Faith shares the story of eight young men and women who are trying to build a new life outside of the Fundamentalist Church of Jesus Christ of Latter-Day Saints (known as the FLDS).

If you loved Big Love as much as I did, you are definitely going to love this new series.  FLDS prophet Warren Jeffs was convicted of child endangerment for having married and raped his underage wives, and FLDS came under a microscope again.  This new series will take us inside Jeffs’s former world, as several young women want desperately to escape.  They seek the help of a former follower who left the the town, and the faith.

On tonight’s show young women from a strict polygamist community, run by the Fundamentalist Church of Latter Day Saints, leave their homes aided by a group of young men, cast out from the church. Their escape turns risky when the security wing of the church interferes.

The premiere of “Breaking The Faith” opens with Martha discussing how the church tells her to “Keep Sweet” and keep her secrets. The church is always watching her, if she gets caught sinning, she can’t go to church. Martha reveals that she doesn’t want to marry into polygamy, or share a husband with several wives. She lives in a secret polygamy town ran by Warren Jeffs.

Zack, an 18 year old member of the secret polygamy town, is the nephew of Warren Jeffs. He has nine mothers, and he has left the polygamy town.

Matt, is 20 years old, and one of Zack’s many brothers. He was trained to take a bullet for his father (the Bishop) and protect him at any means. Zack and Matt were disgusted when Warren Jeffs was arrested and it was revealed he had married a twelve year old child.

21 year old Angie is concerned about having the camera crews in her home, she doesn’t want to get in trouble. She believes that Warren talks to God, and relays the messages to their people. She doesn’t believe that Warren was marrying young girls. She is doing her chores, and cleaning the house from top to bottom, which she does daily. She reveals that in the town there are a lot of rules, you can’t own four-wheelers, or go camping, fishing, or on picnics. She isn’t allowed to go anywhere by herself. She isn’t allowed to go swimming, because the Devil controls the water. Angie’s Father left the religion years ago, and she was assigned to a different family. Before her Father left he told her there was truth in what he was doing, so she is leaving the polygamy town to find the truth her father was talking about.

Marie, 24 year old, is also leaving Short Creek. She wants to be happy, and that is something she has never experienced. She has grown up in the polygamy town, and never done anything fun. She is tired of being watched and treated like a little girl, she is ready to leave.

Ben, a 20 year old, reveals that when a woman leaves the Polygamy town the law enforcement in the town does everything they can to get the woman back. He was kicked out of Short Creek for getting drunk and having sex with girls that he wasn’t married to. He is helping girls escape from Short Creek.

Connie, a 19 year old is also a member of Short Creek. She has a boyfriend named Cody, but they have to sneak around to see each other, because girls aren’t allowed to have boyfriends. She wants to leave the Creek so that she can be with Cody.

Ben is visiting his Mom at work, it is the first time he has seen her since he left the Creek. He is worried about his sisters. Her Mom has some of his siblings meet her at the park. He talks to his sisters for a little bit, and realizes they are brainwashed. They say that they “trust Warren S. Jeffs with their lives.” And, they believe that Jeffs “decides when Earth is going to come crashing down on California.” Ben’s meetings with his sisters motivates him even more to help some of the women escape from Short Creek.

Connie and Angie are secretly discussing leaving with Ben. Connie is scared about leaving her little brother, she is afraid that once she leaves the Creek she won’t be allowed to see her siblings anymore.

Ben is meeting with Matt and Zack, and his friend Jake and putting together a plan to free the girls. Jake left the Creek a year ago. They are trying to pick a good plce to meet the girls without being caught on security cameras, and stopped by “The God Squad.” Once they get the girls out of FLDS, they will move them into a safe house, and help them assimilate into the real world.

The night of the “extraction” Jake and Ben are headed to FLDS to pick up the girls. They are taking backroads into town and hoping that they are able to slip in undetected by “God Squad.” Connie runs and jumps into Ben’s car, but God Squad is onto their escape plan…TO BE CONTINUED