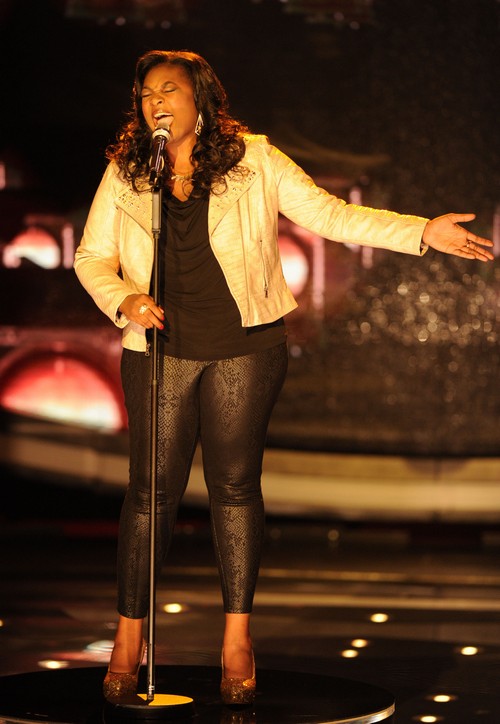 American Idol’s top five performed twice for viewers and the judges on Wednesday night, and the show also sent a message of love out to the victims of the Boston bombings earlier this week. Host Ryan Seacrest opened the broadcast by sending along the show’s support to everyone affected by the bombings and Angie Miller, a Boston native, dedicated her first performance to the city.

Given that it was an all-ladies affair, one of the themes for this week’s American Idol was “Divas“. Naturally Mariah, Whitney, Celine, Beyonce and Dolly Parton were in the mix and we were not disappointed. The choices could not have been picked any better by anyone in the “DIVA” category.

Born in 1989, Candice Glover of St. Helena Island in South Carolina decided to take on two powerful divas, Mariah Carey and Whitney Houston, for her second song.  And OMG! She was awesome! No one in any season of American Idol can touch her undeniable talent! Flawless, effortless vocals from start to finish. Take notes, ladies this is how you win a competition! “That is how you do a Mariah Carey/Whitney Houston song,” Nicki said. “Yes ma’am, diva! Yes!” “That’s the best vocal of the night!” Randy declared. Mariah said Candice did Whitney and the song justice. Keith chimed in that Candice’s voice stops him in his tracks.

Candice has undeniable talent and compared to the two “DIVAS”. This type of talent is coming from a contestant that the AI judges felt last year was not even ready for this type of competition.  Not only did the judges of last year’s AI get it wrong we have our next “DIVA” in the making in Ms. Glover. When anyone can sing any artist’s song in front of that artist and garnish an ovation and bring the artist to tears than you know you have what it takes to win American Idol. Let’s us hear your thoughts should Candice Glover win American Idol? Is her talent better than any other contest on any singing competition?