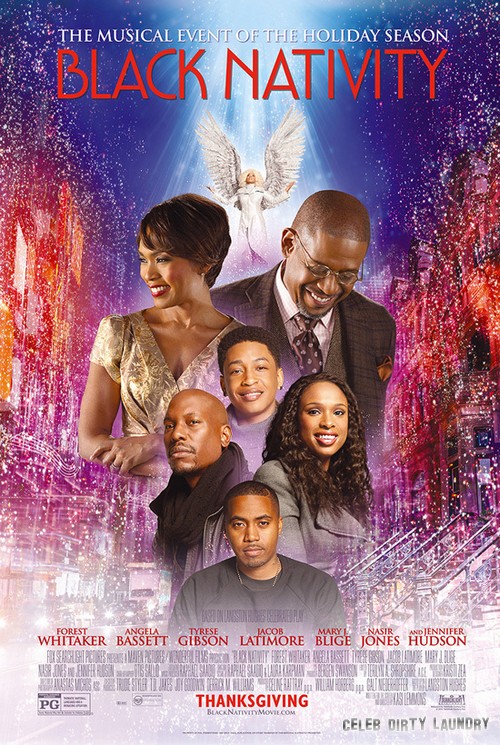 Celeb Dirty Laundry was honored to be invited to attend the NYC premiere of BLACK NATIVITY one of the most critically acclaimed and inspiring films of the year. The movie stars Angela Bassett , Jennifer Hudson, Forest Whitaker , Mary J. Blige, Jacob Latimore and more.   The premiere was held at the Apollo Theatre in Harlem and we were thrilled to be seeing the movie before it hit theatres.

Tis the season to be jolly, when really it’s the season to be thankful. Coming up this holiday season – how many men, women, and children will know where to get a hot meal? How many will be able to claim a warm roof as home? These are the questions that simply become lost in translation. Instead the everyday person will talk about who they are bringing to dinner and who they hope to get a present from that they don’t necessarily need. With the new upcoming movie “Black Nativity”, we are asked what do we need?

In a contemporary adaptation of Langston Hughes’ celebrated play, the holiday musical drama BLACK NATIVITY follows Langston (Jacob Latimore), a street-wise teen from Baltimore raised by a single mother, as he journeys to New York City to spend the Christmas holiday with his estranged relatives Reverend Cornell and Aretha Cobbs (Forest Whitaker and Angela Bassett). Unwilling to live by the imposing Reverend Cobbs’ rules, a frustrated Langston is determined to return home to his mother, Naima (Jennifer Hudson). Langston embarks on a surprising and inspirational journey and along with new friends, and a little divine intervention, he discovers the true meaning of faith, healing, and family.

Although that’s the official synopsis they missed one key component. Langston was sent away not as a punishment. His mother sent him to her relatives because like thousands of parents this year she had to go work. She couldn’t afford to take the time off – not with the way the bills were mounting. Rather than have her son spend the holiday alone she sent him to where he was guaranteed a warm reception, a full stomach, and place to lay his head. These things were precious at home but bountiful in Harlem.

Throughout the rest of the film this same love will carry young Langston through. He at first, like so many teenagers, will not appreciate it. In his own time he came to realize that the family he’s been waiting for was there for the taking. All he had to do was have faith in the people next to him. It wasn’t easy but all good things aren’t available in the stores.

Families are messy and we truly have to take them as they are and not how we wish them to be. Taking a risk on the musical soundtrack, “Black Nativity” explored traditional holiday music with a twist to better express the times. Yes there are people struggling from one day to the next. That pain was expressed in every note played. And yet it never crossed the boundary into exaggeration. It was merely the truth. The mixture of the original and classic music sung by Jennifer Hudson, Angela Bassett, newcomer Jacob Latimore, and shockingly Forest Whitaker helped start this season in good spirits for many in the theatre.  Now currently out on sale; maybe it could do the same for you.

The movie hits theaters Thanksgiving 2013 day and it is a movie not to be missed, so make sure to catch it!