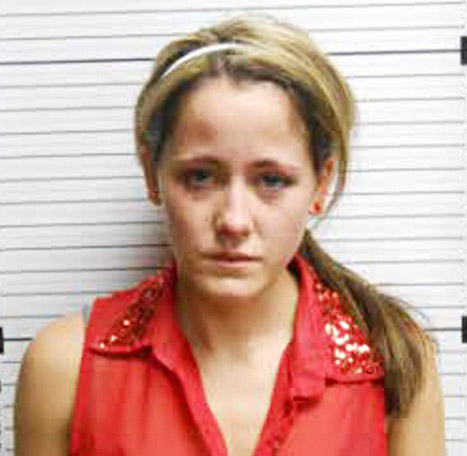 It’s groundhog day for Teen Mom’s Jenelle Evans. She’s finding herself in an ultra familiar situation. Homeless, manless and facing drug charges. After she and her husband, Courtland Rogers were busted for Heroin possession and assault this week, his mother rolled up her welcome mat and replaced it with all of Jenelle’s belongings boxed up. Apparently the couple had been staying there since getting married last winter and now Courtland’s mother is just done. Her son is still welcome but Jenelle is out.

Ironically, Jenelle left her pit bull, Brody, behind for Courtland’s family to get rid of. Have you noticed that anything in Jenelle’s care – be it her dog or her son Jace – ends up being someone elses responsibility?

Jenelle is supposedly staying with her mother Barbara Evans temporarily, but long time Teen Mom viewers know that it’s not a situation that will work out. Jenelle has no respect for her mother (or anyone else for that matter) and when you combine that with her bad behavior, Barbara will be bouncing her sooner rather than later.

When will Jenelle get herself together? My guess is it’ll happen after people stop paying attention to all the drama that she creates. She is desperate to be in the spotlight and by now she realizes that with every misstep she grabs more Twitter followers. Unfortunately I think she’s mistaking these people for real support. Actually people pay attention because watching her train wreck of a life makes anything they might be going through look good by comparison!

Will this week knock some sense into Jenelle? Would she actually want a better life if everyone stopped paying attention to the one she lives now? Has her Teen Mom fame ruined her life, at least for now? Tell me your thoughts in the comments below!