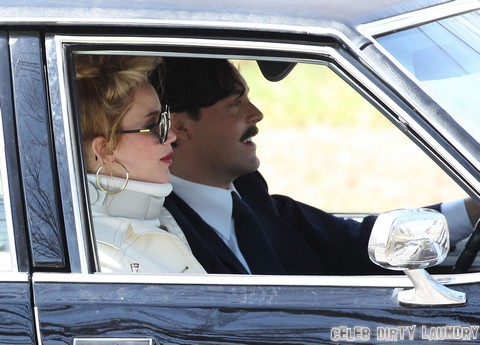 Well, look what we have here. Despite numerous reports stating that Jennifer Lawrence has left Boston for some well deserved rest, she was spotted shooting some romantic scenes for David O. Russell’s Abscam film in Swampscott, Massachusetts.

The film, formerly titled American Bullshit, is currently running as the untitled David O. Russell film, and it takes place in the 70s. It’s based on a true story, and Lawrence plays Marie Weinberg, the trophy wife of Christian Bale’s character, Melvin Weinberg.

Lawrence has been spotted in Boston on the set of this film for the past couple of weeks, and was photographed in almost full-blown wardrobe malfunction earlier last week. After winning the Oscar and shooting to the top of A-list stardom with the Hunger Games and Silver Linings Playbook, Lawrence’s ever move has been under intense scrutiny. So even though Lawrence’s love interest in this film was said to be Christian Bale’s character, it seems like she has more than one.

This means that Lawrence actually seems to have a significant presence in the film, contrary to early reports from the script. David O. Russell may have done some editing and changes to make her part bigger, and right now, it looks more like she has a solid supporting role rather than a glorified cameo, as was earlier suggested.

Now, it’s very hard to tell who exactly she was kissing in those scenes, because the pictures are of very poor quality. However, according to various news outlets and by analyzing the pictures themselves, it looks like it’s Jack Huston. Who he plays in the film, we have no idea, but at least we know that he and Lawrence are involved in a love triangle of sorts. It looks like our girl just can’t enough of these love triangles.

And if you can’t wait until the fall when the Abscam film will likely come out, then you can catch your dose of J Law love scenes in the upcoming ‘Serena’ and ‘Catching Fire’.