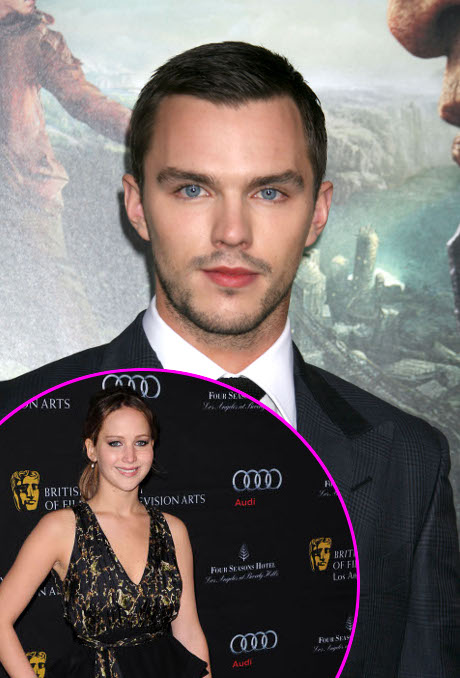 You know, for being one of the most famous movie stars on the planet right now, Jennifer Lawrence is managing to keep quite a low profile. She’s filming ‘X-Men: Days of Future Past’ right now in Montreal, and lo and behold, she was spotted out with her ex-boyfriend Nicholas Hoult and her family.

To recap for those who haven’t been following – Jennifer and Nicholas first broke up before awards season, for reasons unknown [although there’s been plenty of speculation]. Plenty of people claim that it was because of Jennifer and Bradley Cooper, but please, that’s never happening. Then, Jennifer and Nick were spotted together on a ‘date’, for lack of better word, a couple of months ago. Of course, everyone immediately jumped to conclusions and started saying that they were back together, etc.

Then, several sources jumped in and stated that while there was a possibility of a reconciliation, they were taking it slow for now – largely because Nicholas was a bit put off by Jennifer’s fame, and he wasn’t sure if he wanted that level of public scrutiny. Now I say – why let the damn media and paparazzi stop you from being with the person that you love, right?

Well, clearly Jennifer agrees since she seems to be trying her best to get back together with him. Either that, or all the reports are full of crap and they’re already back together. Punk’d.

There’s also the fact that Jennifer and Nicholas are pretty much the only two people of their age on the set of X-Men: Days of Future Past, since all the young actors from the last movie were unceremoniously dumped this time around. No Zoe Kravitz, no Caleb Landry Jones, no Lucas Till. And considering that Jennifer and Nick used to go out for several years, he’s close to her family and it could have just been one big, friendly outing.

But then why did she move away from Nick as soon as she spotted the paparazzi, and why did she flip them off? Lots of interesting questions. Let us know what you think in the comments: Where’s the Jennifer Lawrence/Nicholas Hoult relationship headed?