Jessica Biel Puts A Stop To Justin Timberlake’s Partying – Are Her Ultimatums Working? 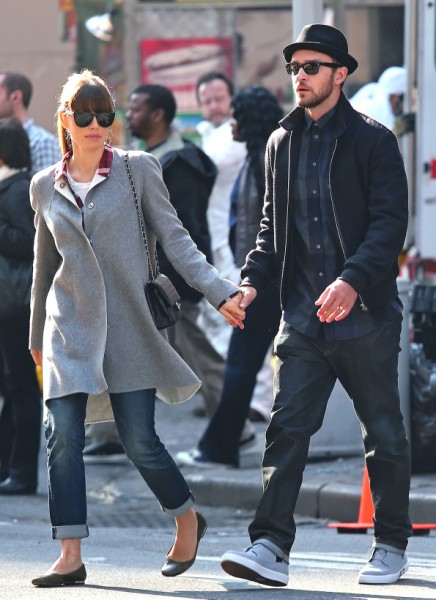 Nothing can bring out the worst in a human being quite like Las Vegas. Justin Timberlake and new wife Jessica Biel were there last weekend to celebrate a joint bacherlor/bachelorette party for friends. I can’t stand when people do that for some reason. Hello ladies? Get some balls and go away from your men for a weekend. It’s not a big deal and probably a lot more fun. Anyway, Page Six reported that at the bachelorette party Jessica Biel got her party on and didn’t disappoint. It was her man that was lying super low during all the festivities and even went home early at the end of the night – alone. To be fair, it seems like Justin had a cold that was holding him back from having a true Hangover experience and his wife advised him to go back to the hotel to mend. I totally expected to hear that Biel went back to the hotel with him but she didn’t. She kept right on celebrating with her friends and even did it the next night when Justin didn’t bother to go out at all. Who is this girl? That’s not what I’d expect from her. I figured she would have researched the best chicken soup in town to make sure she could spoon feed it to him while he watched the NCAA basketball tournament. But she left him to fend for himself. Is Jessica Biel growing on us?

It’s interesting because all I can think about are all those tabloid stories that came out after their wedding reporting that Jessica was putting the stop on a lot of Justin Timberlake’s partying. She supposedly even went so far as to limit his time with some of his douchery friends. Could this self-control in Las Vegas be a reaction to that? Some people genuinely let colds stop them from bachelor parties in Las Vegas but most just take a couple shots and soldier on. Is Biel having more of a calming effect on Justin than I initially gave her credit for? Could this marriage be more than just a bone he threw her after putting up with his shit after so many years? Have you heard Mirrors? It’s my favorite song off his album so far. I love it so much and it’s supposed to be about Biel. God help me but do I like this couple all of a sudden? Could Jessica Biel be more than crappy fashion and horrible movie choices? Could she be a cool chick after all? She is from Boulder, CO.