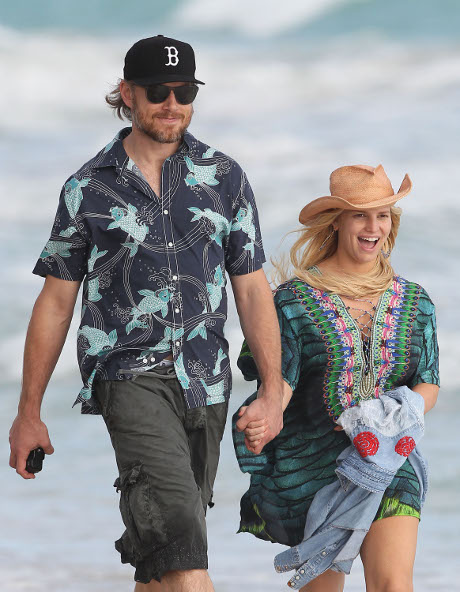 While Jessica Simpson claims to be over the moon happy about her second pregnancy in two years, don’t be fooled, she’s struggling. While Jess and her little family were vacationing in Hawaii she got the scare of her lifetime. After a day of extended walks on the beach and over-exertion the Fashion Star maven reportedly collapsed in pain. According to the latest issue of The National Enquirer, Jessica was hysterical because of stabbing abdominal pain and really believed that she was suffering a miscarriage.

Upon returning to LA Jess checked in with her doctor who reassured her that it was likely a combination of morning sickness and typical early pregnancy cramping that caused the pain.  Luckily Jessica is feeling just fine but this pregnancy is still going to be a lot rougher than her first one was. She had a c-section back in May and her body didn’t have enough time to fully heal from it before conceiving again. Plus let’s not forget the fact that she now has an infant to take care of! Jess’s exhaustion will be considerably worse this time around and her daughter Maxi is going to be crawling pretty soon. Once that baby takes off Jess will be chasing her all day long, unless she has a nanny to do it!

Is Jessica crazy to be having another baby so soon?  Does it come as a surprise to you that the star is already experiencing some issues this time around? Do you think she’ll be smart enough to follow her doctor’s advice and she’ll be a little more cautious while carrying baby number two? Better yet will Jess take her doctor’s cautions as an excuse to be as lazy as possible for the next several months? Tell us your thoughts regarding Jessica Simpson’s pregnancy in the comments below!