Kim Kardashian Getting Paid To Get Fat (Photo) 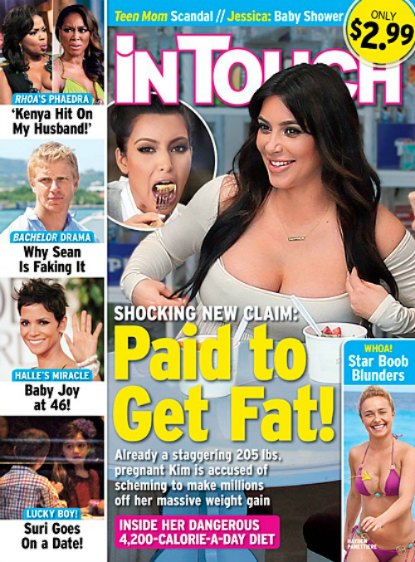 Reality star Kim Kardashian is once again on the front cover of the latest issue of In Touch Weekly. This week, she is apparently getting paid to get fat. That sounds about right!

Everything this broad does has a dollar amount attached to it, so it surprises no one at all that she would take a paycheck in order to shove food in her pie hole at a rapid pace. The magazine reports that Kim is stuffing 4,200 calories per day in her mouth and is already at 205 pounds.

An insider said, “I wouldn’t put it past her to blow up just so her weight loss is more dramatic. The way diet company deals are structured, bonuses are often built in for losing more weight in a shorter period of time.”

The snitch said, “She knows what she’s doing by showing off her heavier figure and stuffing her face in public. The more she looks heavy and out of control with her eating, the more she will be worth.”

Dukan Diet spokesperson Dianna Antlocer said, “We would love it if Kim would be interested in the Dukan Diet to lose the post-pregnancy weight. We would definitely work with her.”

So she can basically stuff her face until the end of time, but as long as she signs up for one of these companies, she is good to go to earn money for something she was going to do anyway. Ugh.