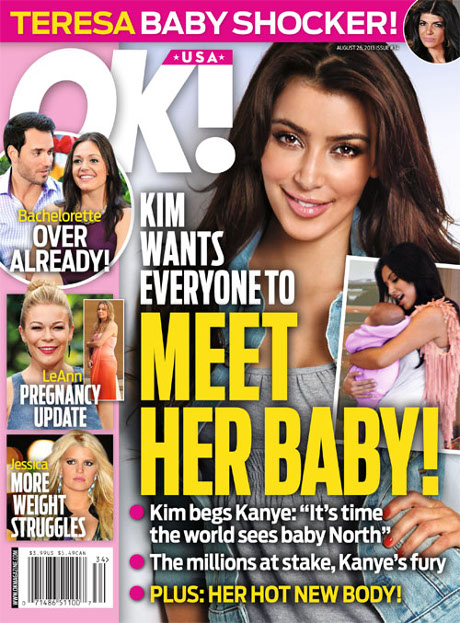 Every celeb-loving person in the world is wishing for one thing to happen soon, and very soon: the reveal of Kim Kardashian‘s lil’ baby nugget, North West! While Hollywood is no stranger to celeb parents wanting to protect their babies from the crazy eyes of the media, Kim Kardashian and Kanye West just seem to be acting paranoid now. As if, once the baby’s face makes it out into the open, the child’s life will come crashing down or something. Well, according to the newest OK! magazine cover, it might not be Kim Kardashian that’s calling the shots on this let’s-keep-the-baby-locked-inside-forever maneuver.

It’s been known (or rumored) for a while now in the media circles that Kanye West has taken steps to control every aspect of Kim’s life, especially when it comes to the lifestyle of their new baby. According to the magazine, Kanye West’s ordering her to keep the baby locked inside and, despite his fury, she says, “It’s time the world sees baby North.”

The magazine claims there’s millions at stake, which is true. The REAL photos of baby North West will bring in a ridiculous sum of money. While neither parties need any more dollahs, you know Kris Jenner can’t wait to get her fingers on that check.

Check out this newest edition of the magazine to get all the info you need to know.