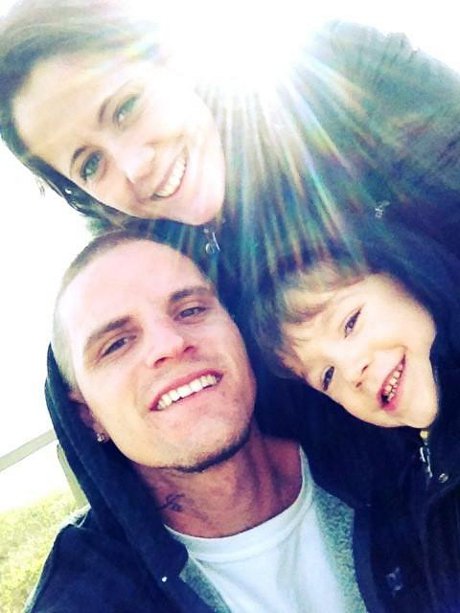 Jenelle Evans might have called it quits with Courtland Rogers, but Courtland Rogers isn’t exactly curled up in a corner crying sad-sad tears of grief. He’s moved on. Last night, the father of Jenelle’s unborn baby released a picture online featuring himself and the new woman in his life: Tiffany Knabe. The pic (click here) was quite revealing, and it even featured a nice little kiss. Courtland has recently come out on Twitter to not just say that he’s wildly in love with Tiffany but that this lovely woman has rescued him. Wow. Must be a fairly amazin’ gal. She’s rescued him from death.

“Any of you that hate on Tiffany and talk sh*t to or about her need to burn in hell,” Courtland tweeted this morning. “I would be dead right now if it weren’t for her!”

Wow, Courtland is a very dramatic individual, is he not? At least he’s found someone else to hold his hand. Courtland recently tweeted some fairly dark things, and Jen put a stopper on that nonsense and told her fans that Courtland was merely fishing for pity and attention. Via Twitter. I swear, the people associated with the Teen Mom franchise are gonna have to stay off the Twitterdome. The Twitter Beast just causes problems and generates drama where drama doesn’t need to be. *palm to face* *face to desk*.

It seems to me like Courtland is lashing out at the world in frustration. Acting a bit like a tiny-baby child.  But how else do you expect a person to react after being accused of assault? I love how the people in the Teen Mom universe get completely entombed in these dramatic situations, completely engross themselves in the fiery passion and then, after a couple days pass by, they forget what sparked it all and make room for some other ridiculosity to be discussed.

What do you think about Courtland hooking up with a new special someone? Put your comments in the section below and let’s discuss!