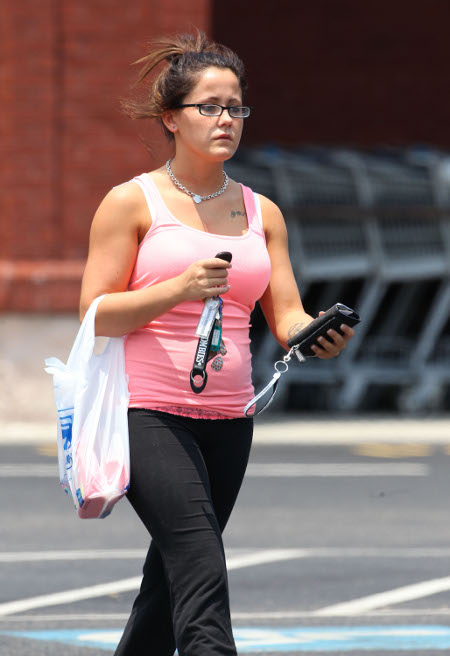 Something always seems to be going wrong in Jenelle Evans‘ life. Unfortunately, the Teen Mom 2 star is currently in the hospital receiving treatment and attention after several cysts ruptured. The reality TV starlet is currently on a road trip to New York and New Jersey where she’s determined to visit the family of her boyfriend Keiffer Delp — that man with whom she shares a volatile, tumultuous relationship with. However, everything must not be too bad with them because, despite rumors that Jenelle has been evicted from her North Carolina home and ongoing rumor-age that the couple are on the rocks, both she and Kieffer are supposedly planning a move to New Jersey.

But Kieffer might be finding himself in the doghouse once again because . . . Jenelle Evans is all alone at the hospital with no one to comfort her. And she’s ticked off. Actually, we’ll rephrase that: She’s quite pissed. In a passive aggressive tweet, Jenelle says, “Please send prayers my way. :( in the hospital once again all alone with no support for a ruptured cysts that bursted inside me.”

This isn’t the first time she’s been left alone and stranded in the hospital. This past summer Jenelle also experienced a rather lonesome stint in the hospital, with only her tears to comfort her. But we’re positive that Kieffer has a stellar reason for not supporting his sometimes-maybe-not-can’t-really-tell-if-she-is girlfriend after this medical scare, right?

If the rumors are true that the couple is planning to relocate to the Garden State, then certain sources have come out and said that Jenelle may experience some issues involving her custody rights involving her son Jace. “This is going to make getting custody of her son Jace much harder,” a source close to Jenelle told Radar Online. “North Carolina law is not going to give custody to Jenelle if she isn’t living in the state…she just always seems to have one set back after another.”

Do you think Jenelle would relocate to Jersey, even if it meant putting her custody rights to her son in question?