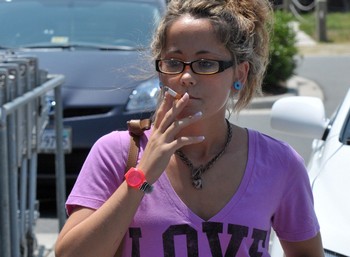 Our jaws were on the floor when we learned that Jenelle Evans married her longtime-acquaintance Courtland Rogers in a courthouse earlier this month. The two were at the court because Courtland was being charged with obtaining property for false pretenses. Now, something predictable has come to pass: the lovebirds are splitting. That’s right—the profound love Jenelle professed to has evaporated, leaving her married, childless (her mom, Barbara Evans, has custody of Jace Evans), and Ke$ha-obsessed. So how did this match made in heaven fall apart?

Jenelle claimed that Courtland was perusing his ex, Taylor, who is also mother of his daughter. She says he waited for her to fall asleep, before calling Taylor to “say goodnight to his daughter” at 11pm! But Jenelle, delusional as she is, wasn’t having any of it! She dumped him, then told Taylor to take him! Poor Courtland was rejected again, and Jenelle tweeted “lmao yeah guess we r in the same boat now, u r completely right about him Taylor.. I’m so serious.” Woah—it’s almost like people make the same mistakes over and over, and even exhibit warning sides!

Their marriage hasn’t been all MTV cameras and fake nails. Jenelle complained on Twitter, “no one even knows the truth what I’ve been going through and that’s all I’m going to say. I can’t blast him BAD but I’m not like Courtland or Taylor . . . I’ve dealt with this twitter sh*t for years . . . This is nothing new lol he can blast me all he wants but when he ends up in prison for yearsssssss cuz of the charges he ahs pending . . . he will then realize how sh*tty he is.”

Since her breakup announcement and freak out session, Jenelle has made her Twitter page private. Teen Mom costar Kailyn Lowry, however, has spoken out about the troubled cast mate, claiming that she and the other moms “can’t help someone who won’t help herself . . . We’re here for her & she knows that.” It sounds like Jenelle is on her own—time to place bets on how long it will be before she falls in love with another loser. Girl is like a magnet for jail birds who spend all their money on weed and heroin (Jenelle claims Courtland was homeless before they got together, just like ex Kieffer Delp was homeless and on cocaine . . . she has a type, I guess!). As always, we hope that Jenelle can get help, and learn to focus on school, work, and maintaining a stable and safe environment in which to raise her beautiful son. Are you surprised Jenelle’s marriage ended on Twitter?