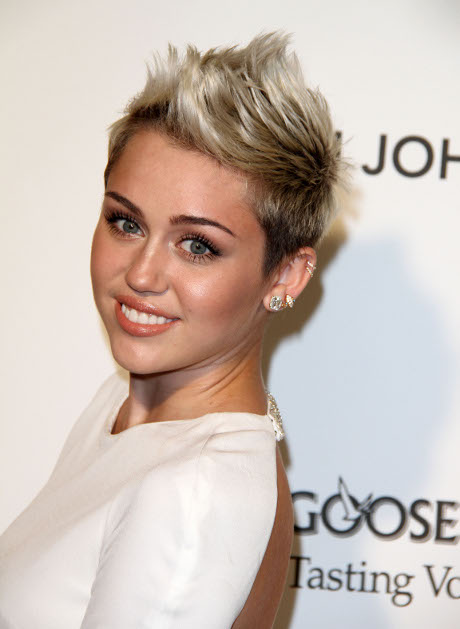 Does Miley Cyrus have a new gentleman in her life? Not long, which feels like seconds, after ditching her engagement ring (courtesy of Liam Hemsworth) Miley Cyrus was spotted beside a young lad. The couple supposedly attended a party together and when Miley was snapped in the passenger’s seat of her Porsche (with her mystery man at the wheel) she tried to hide her face. As if we wouldn’t be able to notice the ever famous Miley Cyrus hairstyle!

The probability of this wedding happening lessens a bit more each day. Liam definitely doesn’t have a good thing going with January Jones — well, he clearly has a good thing going, but it certainly isn’t good for his relationship with Miley Cyrus!

January Jones finally faced the media about her alleged affair with Miley’s man, and she didn’t exactly deny anything. She basically just stayed silent — probably the best thing to do in this situation, right? Liam’s alleged unfaithfulness was what allegedly caused Miley to pull that ring off in the first place, so perhaps this brief outing with Mysterious Man Dude is just a way of getting back at her Aussie Beaux? Yikes. So much allegedality!

Now there’s a real possibility that Miley and her man are merely friends, but the pictures of them together have a little bit of scandalosity lining them. They’re not really doing anything scandalous; however, you can tell that Miley definitely didn’t want to be seen (CLICK HERE for pictures of Miley’s date night). She definitely didn’t want that. The guy arrived at the studio after Miley finished up a recording. The two got in Miley’s Porsche and drove to a party together where they reportedly drank wine and had a joyful time. They left together, too.

What do you think is the fate of Miley Cyrus and Liam Hemsworth’s engagement? Is it off for good? Or is everyone just making a mountain out of a molehill and backseat affair? If absolutely nothing was going on between Liam and January, don’t you think January would’ve just put the rumors to bed? Let us know your thoughts after watching her vid below!