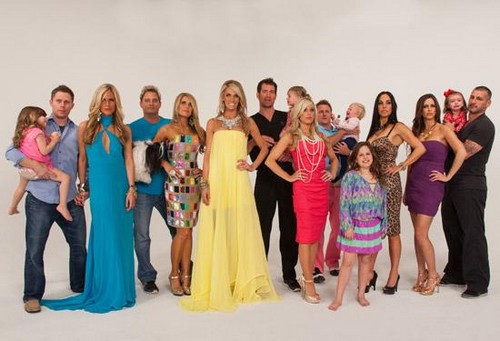 Tonight on Lifetime PRETTY WICKED MOMS continues with a new episode called, “Three’s a Crowd.”  On tonight’s show Miranda decides to give her old career a second chance with humiliating results.  Did you watch last week’s episode?  We did and we recapped it for you, HERE.

On last week’s show the six ultra-competitive moms in Atlanta plotted and schemed to get ahead and it’s Halloween and Divorcee Marci celebrated with an extravagant costume party. Meanwhile, Newbie Meredith didn’t seem to have what it takes to keep up. Emily and Nicole N. took her under their wing only to discover a bombshell about her past.

On tonight’s show it’s trouble in paradise for Queen Bee Emily and her husband Pete when the unthinkable happens: their beloved nanny takes a vacation. The dominos continue to fall when Emily’s parents visit from out of town. Southern Belle Miranda decides to give her old career a second chance with humiliating results.

Tonight’s episode is going to be another drama packed one, which you won’t want to miss. So be sure to tune in for live coverage of Lifetime’s Pretty Wicked Moms Season 1 Episode 4 “Three’s a Crowd” — tonight at 10PM EST.

Pretty Wicked Moms begins tonight with Miranda deciding that she wants to model again- with their son Ledger. Her husband is none too happy with it but she made the decision without him anyway. Meanwhile Emily is freaking out because her round the clock nanny is daring to take a vacation. She seriously has no idea how to handle her daughter alone which is pretty sad.

Miranda goes for the audition and gets lambasted because her headshot is old. I mean the guy tells her that she looks like she has aged which is pretty insulting and her face shows it. Meanwhile Emily cries as her nanny leaves because she doesn’t even know what to feed her baby for lunch. Her husband has to leave to go to the hospital to take care of a patient and Emily is flipping. She had a fashion client that’s just as important as his medical emergency.

What a selfish brat this chick is. She clearly doesn’t spend real time with her daughter. Emily takes her baby to the store and then complains nonstop about her daughter interrupting her work mode.  She also is interrupting her marriage. Since Emily insists on letting the baby sleep with her that has sent her husband to sleep alone on the couch.

Emily decides to deal with her kid by planning a huge play date. The ladies seem to think Emily is as pathetic as I do. They are mocking her for complaining about having to play with her kid. When Emily goes home she has her parents over for dinner and it’s ugly. Emily and her husband fight because she insists on giving her two year old soda. Her husband is pissed and her parents take his side rather than Emily’s.

Emily’s husband decides to talk to Nicole, Em’s sister. He asks her to help get the baby out of his bed. Nicole and Emily decide to decorate a great room for the baby, with the hopes of her sleeping there. She has no problem sleeping in her big bed but Emily can’t cope. She asks her husband if she can go sleep with the baby! Tune in next week for more Pretty Wicked Moms.