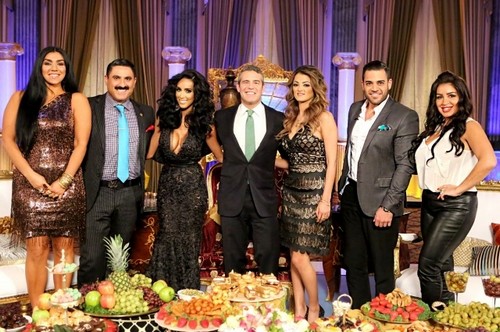 Tonight on Bravo is the season three premiere of SHAWS OF SUNSET called, “Only Guilty Men Bring Flowers.”  Shahs of Sunset follows a group of young Persian-American friends who juggle living and working in L.A. while balancing the demands of their families and traditions. On tonight’s show after an epic battle at reunion last season, Reza decides to mend fences with MJ in the best way he can.

In Season 3, Reza is faced with turning 40 and reevaluating everything in his life from finally moving in with his boyfriend Adam to his rocky business partnership with Mike. This season, Reza’s most dramatic challenge yet is before him as he is confronted with some personal demons he thought were long buried. Newly single MJ is in a ‘rebuilding year” mending her relationships with former BFF, Reza and “Iron Mom” Vida.  Mike struggles with some serious life decisions in business and love.  GG is working to redeem herself with her friends, mending bonds with her alienated family and making a go of it with a new boyfriend, but her fiery temper proves harder to bury than she thought.  Lilly finds herself focusing on work as her friendships within the group are tested.  Asa, is in the process of reinventing herself.

On tonight’s show after an epic battle at reunion last season, Reza decides to mend fences with MJ in the best way he can. Faced with turning 40, Reza also looks to treat himself to a Porsche. Mike and his girlfriend Jessica get serious when she agrees to start the process of converting to Judaism. GG and her sister Leila find a new friendship in the midst of Leila’s surprise divorce. Working to move forward, GG finally apologizes to her old nemesis Asa. Lilly throws herself a gala bash for her “Dirty 30” birthday, but MJ ends up left off final guest list leaving Reza and the rest of the group caught in the middle.

Season 3 of Shahs of Sunset picks up three months after the Season 2 finale. Mike and Reza are going car shopping. Reza has decided he needs to buy himself a Porsche for his fortieth birthday. Mike is confused about how Reza is doing so well and can afford a Porsche, seeing as how they are business partners and he is not making that kind of money. Reza reveals that Mike hasn’t been making any money, since the two went into business together.

Reza meets the car salesman, and is delighted to see he is also Persian. Reza is conflicted about whether he should or should not purchase the Porsche. Reza doesn’t close the deal with the salesman though, the Porsche has too many miles on it. He is maturing and knows it is not smart to buy a car with such high mileage.

MJ is spending some quality time with her Mom, Vida. They are shopping too, but they are in the market for bicycles, not Porsches. MJ’s Mom is having fun riding bikes in the park, MJ is not a fan of her negativity though. She tells her Mom to act more like Cyndi Lauper, and have a little fun. Vida’s not impressed with her Cyndi analogy.

Lilly and Reza are shopping for Lilly’s 30th birthday party dress(es). She has decided she will change her dress four times throughout the course of the evening. Lilly wants her party to be as glam as she is, she reveals to Reza that MJ still hasn’t RSVP’d to her party, and it is invite only. If MJ shows up at the door the night of her party without RSVP’ing, she will be denied entry.

GG is spending some quality time with her sister Leila and her nephew. According to GG, her sister is going through a divorce, and the two have grown extremely close since her break-up with her husband. GG thinks she has put her “big girl panties on,” she thinks she is ready to get married and have babies. She says if her kids ever fight or do drugs she will “take their lives.”

Reza pays Asa and her parents a visit for dinner. Over dinner they discuss Lilly’s upcoming birthday party. Reza is concerned about MJ not RSVP’ing. He is scared that she will show up at the party and not be allowed in. Meanwhile, Asa is more concerned over parents’ health, and trying to get them to eat healthy and exercise more. Asa’s Mom says she doesn’t need to get healthy, she knows a good plastic surgeon. Asa’s inner Priestess comes out and she gives her family a pep talk about positivity and taking care of their bodies.

GG pays MJ a visit at her apartment. MJ wants to get rid of all the “old, dead energy” in her life and nominates GG to help her clean out her closet. She is going to take all of her old clothes, purses, and shoes to a vintage store and sell them. The two begin chatting about Lilly’s birthday party, MJ says she is going to go (even though she hasn’t RSVP’d yet, hopefully Lilly will let her in). The conversation turns to MJ’s relationship with Reza, according to her the dynamic duo have been cordial to each other in public, but their friendship is far from mended.

Mike and his girlfriend Jessica are getting serious. Jessica has decided to convert to Judaism so she can be with Mike, and be accepted by his family. The two attend a Jewish party thrown by the Rabi who will be teaching Jessica at conversion school. The party turns awkward when everyone assumes Mike and Jessica are engaged, and she corrects them by flashing her bare ring finger. Mike isn’t ready to propose, but he thinks he will ask Jessica to marry her in the future.

Reza calls MJ and says that he “having an emergency and needs to come over.” MJ reluctantly tells him he can come over. Reza shows up at her door step with a bouquet of flowers. “Flowers only come from one place, and that’s guilty men,” according to MJ.

MJ wants to know what his emergency is. Reza says he has come to prevent MJ from being embarrassed. He wanted to warn MJ that if she shows up at Lilly’s party, she will not be allowed past the gate, and will be humiliated. MJ decides to send Lilly a super sweet text apologizing for not RSVP’ing, and asking if she can still come to the birthday dinner. Reza is convinced Lilly will let her come. Lilly texts her back, and coldly tells her she can’t attend her party, there isn’t enough room at her dinner table.

Lilly has employed a glam squad to help her and her friends get ready for her birthday bash, she has even ordered a designer dress for her dog Coconut to wear to her party. Apparently her glam squad also moonlight as twerkers, they show Lilly a few of their moves, but determine she doesn’t have what it takes to twerk at her party tonight.

Reza, Asa, and his boyfriend Adam are sharing a limo to Lilly’s party. Reza is disappointed that MJ won’t be attending Lilly’s birthday party.

Lilly and Coconut make their appearance in Dress #1. Lilly has hired her own personal paparazzi to photograph the event. Mike, Jessica, and GG are all in attendance.

GG is having her own issues at the party, she feels uncomfortable with Asa there. She decides that she wants to bury the hatchet with Asa for the night to avoid any awkwardness.

Lilly appears in Dress #2 for the formal dinner. Lilly has deemed her birthday party a Persian Prom, and has handed out ballots so her guests can vote for Prom Queen, and by vote she means write her name on the ballot, because regardless of the results she will be crowned Prom Queen.

Lilly emerges in Dress #3 and announces she has been voted Prom Queen. Asa isn’t impressed, she went to Beverly Hills High-School Prom, and Lilly’s birthday bash is NOTHING like prom.

GG has some liquid courage in her, and she decides to have a heart-to-heart with Asa. She apologizes profusely for her behavior in the past, and Asa accepts her apology.

It is 1:00 AM and the party is still going strong, and the tribe has obviously been drinking since the party began. Asa, Reza, and GG are unhappy about MJ not being allowed to attend and they confront Lilly (now in Dress #4) about it. Lilly freaks out, and decides that if you don’t RSVP to a party then you have no class, and the end of her birthday party sets the stage for a season full of drama between Lilly and MJ.