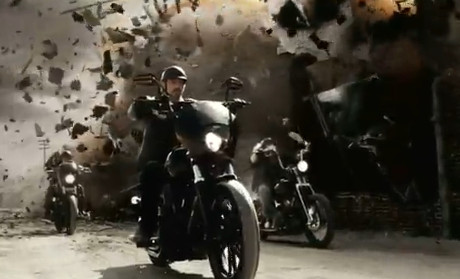 Sons of Anarchy will be returning September 10th and with the release of the new teaser trailer, which doesn’t do an amazing job “teasing,” we at least know the season’s going to be an explosive one. The trailer basically consists of your favorite characters riding down the street on their motorcycles. As they proceed down the street, the brick building next to them explodes — leaving the characters’ faces, which were painted on the bricks, in smithereens.

While the teaser trailer doesn’t offer much in the realms of spoilage, the show creator Kurt Sutter says the premiere episode will feature a scene that’s sure to stir some debate in both fans and critics. He has this to say on the hot-button issue/subject:

“I’ve wanted to do that story for about three years,” Sutter told reporters at the Television Critics Association fall previews Friday. “I knew it would be somewhat controversial, but I feel like as much as I wouldn’t do something [just] because it was controversial, I’m also not going to do something because it is controversial. … There’s a lot of blood and guts in my show – it’s a signature of the show. But I feel like nothing is done gratuitously. … I am not trying to make a statement. This is a story that’s not being done to be sensational.”

Fans of the show, what could possibly be this controversial topic SOA will tackle? Chat about season 6 in the comments section below!