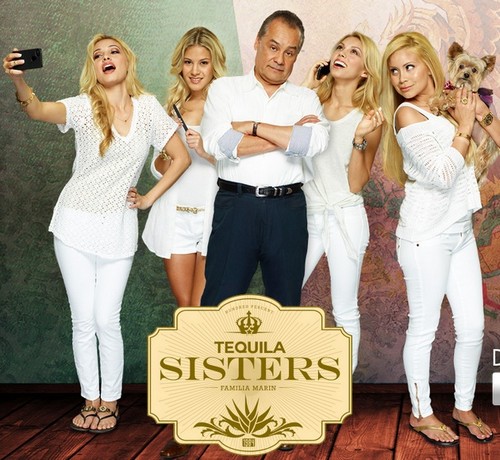 TV Guide Network’s hottest new reality show, Tequila Sisters premieres tonight with two 1/2 hour episodes. This docu-soap spotlights the Marins, a wild and passionate Mexican family, who’ve made their fortune in the Tequila business and live the life of luxury in Southern California.

The show depicts the contrasts between traditional Hispanic family values and the glamorous Hollywood lifestyle as Mr. Marin tries to keep his four beautiful, bold, and independent daughters close and under one roof.

On the first episode tonight Jen celebrates her birthday with a lavish party and receives a surprise from her boyfriend in the series premiere of this reality show about a wealthy California tequila entrepreneur struggling to let go of his independent-minded daughters.

On the second episode tonight Lauren contemplates doing a nude scene in a film, but she worries about her dad’s reaction.

Tonight’s episode is going to be a drama packed one, which you won’t want to miss. So be sure to tune in for live coverage of TVGN’s Tequila Sisters “Episode 1 & 2” — tonight starting at 8PM EST.  While you wait for the recap, check out a sneak peek of the show below!

The season premiere of Tequila Sisters, opens with Lori and Bill discussing how the economy has affected their Tequila business. A few years ago, business started to slow down, and it has really put a damper on their funds.

Lori and Bill Marin have had their hands full with their four daughters, and trying to raise them properly. California kids grow up much differently than they did in Mexico. Jen, their oldest daughter, is very controlling and “bitchy.” 25 year old Lauren is a sweet princess. Jackie, their 23 year old daughter is head over heels in love, and trying to grow up too fast. Catherine, their 21 year old daughter, and youngest is a “little trouble-maker.”

Jen is planning an over-the-top birthday party, she wants her Dad to fork over $40,000.00 for the party. Her Dad says no, because their business has really taken a hit. Jen moved out of their house, so it is no longer their responsibility to support her financially.

Jen is trying to get her boyfriend Greg to pay for her birthday party, she hits him up for $25,000.00. He agrees to pay for her party, but that is her present, he isn’t buying her anything else.

Jackie is in love with Nicky, a professional motorcycle racer. He is currently in Europe, and she misses him. She is trying to video-chat with him, but her sister Catherine is bothering her.

Jen calls a meeting with her sisters in the hot-tub. She wants to tell them the rules for her birthday party. She will be wearing pink, and they have to wear black. She wants them to find cocktail servers for her, and a birthday cake, and they aren’t allowed to bring any of their friends to the party.

Lauren and Jackie head into the house to discuss Jen’s party. Jackie thinks her sister Jen is being a “complete psycho” and she doesn’t want to go to her birthday party because she knows it is going to be a “disaster.”

It is the night of Jen’s big birthday party. The Marin family hits the bar, Jen is concerned that her Dad is going to get out of control, he has a slight drinking problem. Jen is upset because Jackie is late to her party. Jackie tells her that she is late because she “really doesn’t want to be here.” Jen calls her out in front of everyone and tells her that her “hair looks ragged.”

Greg decides to make an announcement, and says “big things come in small packages.” The entire Marin family gathers around, convinced that Greg is finally going to propose. Instead he brings out a tiny male stripper. Bill Marin is furious. He thinks Greg is making a mockery of his family. Instead of ring, he gave his daughter a midget. Bill causes a scene, and Jen kicks him out of his birthday party.

The next day, Catherine reveals to Jackie that Jen “went psycho.” She went through Greg’s phone, and took a knife and slashed all of Greg’s paintings after her birthday party. Catherine decides that she is going to tell her parents about how crazy Jen is acting.

Jackie pays her sister Lauren a visit, she is concerned about her spending too much time with crazy Jen and Greg. Lauren wants to be an actress though, and Greg is helping her get into the Hollywood scene. He is working on a movie, and got parts for all four of the Marin sisters. The movie premiere is coming up, and Lauren is nervous because she goes topless in one of the scenes, and she knows her Dad is going to flip out when he sees it.

Bill calls a dinner meeting, and makes sure Jen, Jackie, Lauren, and Catherine are all present. He has a big announcement to make about his business. Generally he imports and exports tequila, but he has decided to create his own tequila label. Jackie, Lauren, and Catherine are excited about the new label. Jen is annoyed though, she doesn’t see why Greg couldn’t come to the family dinner. Bill informs her that he is not welcome to family events until he proposes to Jen. Jackie calls Jen out, and tells her parents that after Jen’s birthday party she threw Greg’s phone off the balcony and trashed his paintings. Jen storms out and tells her parents they are uninvited to Greg’s movie premiere.

Jen and Lauren head out to lunch the next day to discuss her fight with her parents. Lauren is relieved that her parents were uninvited to the movie premiere, because now she doesn’t have to worry about her Dad seeing her topless.

Lori is furious that Bill got them uninvited to the movie premiere. She wants to him to go talk go Greg and get them invited again.

Jen and Lauren are shopping when Jen receives a text from Greg. Apparently Bill went to Greg’s office and made amends with him, her parents will be at the movie premiere tonight. Lauren is freaking out, what is she going to do when her Dad sees her topless scene?

Bill is excited at the movie premiere, he is proud that all four of his daughters are appearing in the movie. He has no idea that he is about to see his daughter’s breasts on the big screen in front of dozens of strangers.

The movie starts and Lauren waits for her scene to come on. She sits behind her father and watches him cry during her nude scene. After the premiere they head back upstairs for drinks, her Dad is upset and asks her whose idea it was for her to go topless. She explains that it was her idea. In the middle of her argument, Jackie walks away and answers her phone because Nicky is calling. Lauren gets upset and storms out of her own movie premiere.

She feels like her family ruined the screening of her first movie.