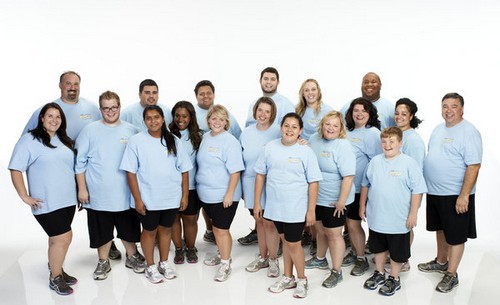 THE BIGGEST LOSER live recap on Celeb Dirty Laundry returns tonight to cover an all new episode. Tonight’s episode entitled “Face Your Fears” features the six remaining contestants forced to face their fears. Whatever that means? Did you watch last week’s show? We did and recapped it here for you?

On last week’s show players were informed that they would have the chance to win immunity for the entire week if they lost collectively 70 pounds.  An example of collective reward – one has to ask, is this show fair? They had a chance to lose 10 pounds off their total with the help of the returning kid participants Biingo, Lindsay and Sunny, whose brains and brawn were tested in a pop challenge. With emotions and tensions at an all-time peak, the week’s theme of “working together” was a tougher challenge than losing the amount of weight that would keep them all safe for another week.  The contestant who fell below the red line last week was Francelina.  Francelina was certainly not the biggest loser and she was sent going home.

On tonight’s show it’s “Face Your Fears” week, and the fear of leaving the ranch is the first one addressed when a “save your neighbor” challenge determines which contestant has to leave the ranch and go out on their own for the week – along with another player of their choice. One by one, with the help of trainers Bob, Jillian and Dolvett, each contestant is forced to face their fear – ranging from a fear of sharks to claustrophobia to a fear of singing in public. And they all face fear in a harrowing challenge off the top of a seven-story building that will reward the winner with the most coveted prize of all, immunity.

Back at home, the kid participants are also facing their fears head on. Sunny’s very real fear of losing her Mom due to her mother’s weight prompts her to have a very difficult and emotional conversation, while Dolvett arranges for pre-diabetic Lindsay to face her fear of developing the disease by meeting someone with diabetes and learning about their daily challenges. On the lighter side, Biingo faces his fear of eating vegetables! Later, the weigh-in will reveal how the two players out on their own did this week, and will also determine who is leaving the ranch for good, leaving the final five contestants of the season.

The Biggest Loser season 14 episode 9 airs at 8PM on NBC and we will be live blogging it with all the up-to-the-minute details. So make sure to come back to this spot and spend the evening with us! Make sure to refresh often to get the most current details and updates!

Sometimes I wonder about The Biggest Loser. The show claims to help people gain confidence and acceptance of their body image while at the same time telling them that being fat is bad and something to be ashamed of. The Biggest Loser tries to make contestants and the audience believe that losing fat is the key to happiness and a great life – as if! Of course that’s not true and people learn that whether or not they lose weight they still are stuck with being the same person.

Tonight’s show picks up where last weeks left off.  Francelina has left and Alison tells the remaining conestants that someone else is leaving.  One contestant will go home for the week.  This week is about facing their fears and someone will face that fear by leaving the ranch for the week.  There is a challenge to see who will be going home.

There are pictures of each of the remaining contestants and blocks and you have to save another contestant and make sure their picture is not covered up.  There is also a twist the person who stacks the most blocks will get a 1 lb advantage this week.  Each blog weights 25 lbs.

Alison tells the rest of the contestants they will have their own fears to face.

Jackson and Jeff pulls up to the house and he is frightened.  Jackson thinks it is a good opportunity to see how it is going to be when he goes home.   In the house there is no food and no trainers.  They have money for the week and have to buy their own food.

The trainers check in with their kids.  Dolvett finds out that Lindsey is afraid she is going to get diabetes, she is already a pre-diabetic.  Bob knows that Bingo’s biggest fear is vegetables.  Sunny is frightened that she will lose her Mom because her Mom is not getting healthy.

Jackson and Jeff head to the grocery store to buy food.  The boys are keeping each other in check.r

Day 2 off the ranch Jeff and Jackson decide to go on a hike.  They go to the top of a mountain and they work hard.

Challenge:  The contestants hang on in the air for dear life.  They are suspended from the top of a building.  If they let go they fall over the building side.  It is not an easy challenge.  Everyone falls off and it is down to Gina and Danni.  Danni lets go and Gina wins the challenge and she gets immunity for this week.

Danni gets to face her fear and that is singing in public.  Jillian arranges for Danni to sing The National Anthem.  Bob gets Joe to swim in water where there are sharks.  Joe’s biggest fear is sharks.

Meanwhile the boys Jackson and Jeff have decided that they will do a lot of cardio all week.

The two people below the yellow line is Alex and Jackson and one of them will be going home.

That is enough, Alex is eliminated and she is sent home.  She is not the Biggest Loser.  Alex says she is going home proud of herself.

Alison tells the remaining contestants they have made it to Makeover Week but they are also going home and reveal the new “You” and reveal themselves to their family and friends.