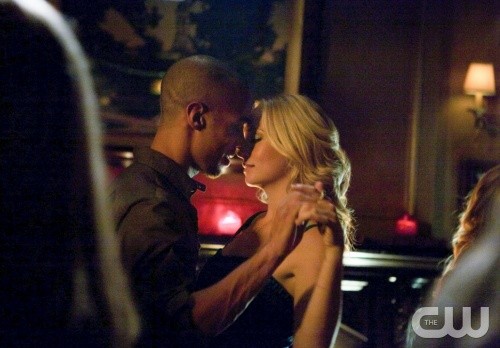 Tonight’s The Vampire Diaries returned to the CW with another stellar episode.  I just cannot wait until the next episode, while you wait for next week’s episode, as usual, we have some juicy spoilers and a sneak peek video of “Dead Man on Campus” for your enjoyment below!

On tonight’s show while Elena and Damon tried to explain Amara’s situation to Stefan, Dr. Wes gave Katherine some deeply disturbing news, she is aging and aging quick. Nadia shows up at Caroline’s dorm room, searching for Katherine. After a surprising conversation with Amara, Jeremy and Bonnie share a glimmer of hope. Silas fails to keep a promise, causing Damon to turn to Tessa for help with his new plan, and Stefan makes a heartbreaking confession to Damon and Elena.  Did you watch tonight’s episode?  We did and we recapped it here for you!

Spoiler alert: If you’re one of those people who doesn’t like spoilers, stop reading now! We have some juicy spoilers for you about the season 5 episode 8 of CW’s “The Vampires Diary.”

Official CW Synopsis: “At Whitmore College, Elena (Nina Dobrev) and Caroline (Candice Accola) decide it’s time to throw a big party, but their plans are interrupted when Jesse (guest star Kendrick Sampson) suddenly needs Caroline’s help. At Elena’s request, Damon (Ian Somerhalder) comes up with an effective method to get Wes (guest star Rick Cosnett) to answer his questions. At the party, Elena finds that she and Aaron (guest star Shaun Sipos) have a lot in common, and Caroline grows more concerned about Jesse. Meanwhile, Katherine (Nina Dobrev) does a favor for Matt (Zach Roerig) and manages to get through to Stefan (Paul Wesley), who is still struggling to overcome the events of the summer. Finally, Bonnie (Kat Graham) does her best to cope with her new reality, and Damon makes a terrifying discovery about a secret society. Steven R. McQueen also stars.”

On next week’s episode it sounds like things are really heating up.  Stefan thought that getting rid of Silas would allow him to move on with his life but that did not happen.  Bonnie new there would be consequences for using magic, now that Bonnie is back she has to deal with her new reality.  People who want to go to the other side have to go through Bonnie and it is painful as hell.  We are going to find out about a new secret society next week.  Don’t forget to check out the end of the video when Elena tells Stefan to relax and he grabs her by the neck and tells her, “he can’t do that!”  Yikes!

The Vampire Diaries Season 5, Episode 8 “Dead Man on Campus” airs on the CW on November 21st, 2013. Check out the preview video & some photos from episode 8 and let us know in the comments below what you think!