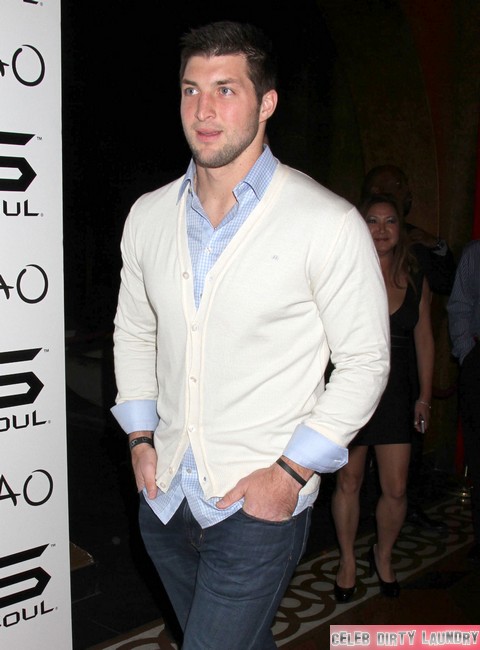 You knew Tim Tebow wouldn’t be single for long, right?  The embattled New York Jets quarterback may be struggling at work but Celeb Dirty Laundry can exclusively tell you that his love life seems to be heating up once again! A well-placed source tells Celeb Dirty Laundry exclusively that the NFL star is quietly dating Calli Blaine Balzano who goes simply by Calli Blaine. Tim and Calli both attend the same church, First Baptist Jacksonville and first met at his annual charity event in 2012 in Ponte Vedra Beach, FL, on April 14, 2012.

Just how close are they? Well after only a month of dating Calli has met his family and has opted to spend time with Tim in Arizona while he has training. Supposedly the thing that drew Tim to Calli (aside from her stunning looks) is the fact that she’s a down to earth real woman. So there you have it, forget about all the rumors and speculation about which athlete or cheerleader Tim is seeing, it sounds like he is over that prototype for a girlfriend. Tim’s looking for someone a bit more real and perhaps Calli is it!

Now if only the football star could find his game once again. He had a lousy season with the New York Jets and when it comes to trade rumors- well those are just rumors. Teams such as the Jaguars appeared to want Tebow but have changed their minds. It has even been said that the star plays more of a college game than anything NFL caliber! It’s a good thing he at least has Calli to vent his work frustration to!

I know it’s brand new, but do you think maybe Calli and Tim’s relationship will work out? Tell us your thoughts in the comments below!

Update 9:36 EST – We just called Tim Tebow’s rep at the Jet’s office to confirm the story but we were told “we’re unable to make any type of statements about Tim’s personal life.”