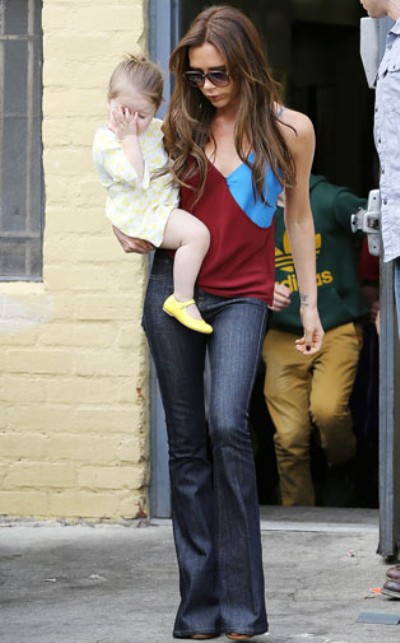 Victoria Beckham’s boobs are making headlines again but this time not for doubling as earrings. It appears that Posh Spice has finally taken her ginormous jugs out. It was rumored (and documented by biographer Andrew Morton) that Victoria had her first boob job in 1999 after the birth of her first son, Brooklyn. She went up to a 34D which is quite the jump for an A cup girl. Since then she’s gone up to a 34DD but seems to have finally realized how ridiculous they look. She was just papped with daughter Harper Beckham looking like her natural self again, flat-chested and all. It’s such an improvement!

Victoria has blatantly lied over the years saying she’s never had anything done to her chest. Biotch please! As a fellow flat-chested girl I know there’s no way you can get your boobs to look like that with tape and a push up bra. No way!

So why the big change? I doubt she’ll tell anyone since that means she’d have to admit having a boob job in the first place but it probably has a lot to do with the fact that she’s some big shot designer now. Everyone’s wearing her clothes and she’s finally getting real respect for her line. I’m sure it’s difficult to be taken seriously when everyone’s staring at your fake tits. And I like to think she’s doing it for her daughter. Perhaps she’s showing little Harper Seven that you don’t need mammoth ta-tas to feel sexy or good about yourself. Or maybe it’s much more simple. Maybe her back hurts from carting those around all these years. Biotch weighs 10 pounds. That couldn’t have been easy!

I wonder what David Beckham thinks of the breast reduction. Victoria Beckham probably got them for him in the first place, right? After being married for as long as they have I’m sure he appreciates the change.