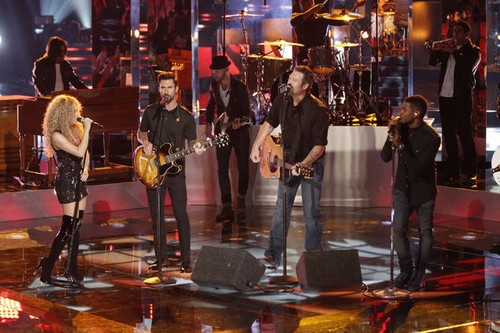 Tonight is the season finale of THE VOICE and host Carson Daly will reveal who America has chosen to be the season 4 winner of The Voice by the end of the evening.  My brain is saying Michelle Chamuel will win it all, the judges have piled praise on her week after week, but, I am hoping Danielle Bradbery takes home the crown.  I seriously doubt the Swon Brothers have a chance of winning.  Who ever wins tonight all three artists are talented and it is going to be a tight race.  Did you watch last night’s show where the remaining three contestants brought their “A” game?  WE did and we recapped it for you here.

On last night’s show the final vocalists competed for the title of The Voice – in the final phase of competition.  The remaining thee artists took two the stage to sing three songs.  Two songs solo and one song as a duet.  One song was a reprisal of a song they previously did, one a new song and one a duet with their coach.

We conducted a poll today and 56.89% of our viewers think Danielle Bradbery will be crowned winner of The Voice tonight.  29.34% are rooting for Michelle Chamuel, with The Swon Brothers following with 13.77 of the vote.  If you have not voted in our poll there is still time, GO HERE!

On tonight’s final result show one singer will be announced The Voice and the show will feature special guest performances from Cher, Bruno Mars, Georgia Line, Christina Aguilera and Nelly.  Nelly will perform his summer’s hit single, “Cruise.”  It will be Cher’s first live television performance in 10 years.  There have been some rumors that Nicki Minaj may perform with Nelly, but no confirmation yet.

Tonight’s  The Voice “Finale”  is going to be an exciting one, which you won’t want to miss. So be sure to tune in for our live coverage of NBC’s The Voice – tonight at 9PM EST and find out who is crowned the winner!   While you wait for our recap, hit the comments and let us know who you are rooting for?

Recap: Opening the show is Pit Bull and Christina Aguilera singing “Feel This Moment”. The winner of The Voice will be announced tonight. Christina thought the stand out moment last night was a caliber of talent, she says Happy Birthday to Blake. Last night Adam thought Danielle would win, but maybe, because they are all so close. Usher is proud of Danielle to be this far. Blake thinks everyone did a good job, it could be anyone’s win.

The Swon Brothers are bringing high energy to the stage singing “Stars Tonight” with Justin, Holly and Amber.

Michelle joins a great band on stage, One Republic and they are singing “Counting Stars”. We get to see a little comedic look behind the scenes of Usher’s judging techniques then it is a performance by Nelly singing “Cruise” with Georgia Florida Line and Flo Rida.

Some of our previously voted out contestants VEDO, Josiah, Kris and Garrett are on stage now singing with Holly on Sax singing “Sweet Baby”. Still no results, they are going to wait till last minute.

Danielle is bringing back her best Voice friends; Amber, Caroline and Sarah to sing “All American Girl” with her. Danielle is the predicted contestant to win tonight, I have to agree, really like her voice whether she sings alone or with a group.

We get a look back at some never before seen moments of The Voice. Usher reveals that often when he is on stage, he rips his pants. Shakira tries to take Cee Lo’s pet bird and some other fun stuff.

Bruno Mars is up next singing his hit song “Treasure”; love all the red suits and that Motown look. Although I loved this performance, it would have been great to see VEDO perform with Bruno.

The Swon Borthers take the stage with Bob Seger singing “Night Moves”, what an amazing performance; love the blend of their voices together.

The women whose powerful voices are brought back to the stage; Sasha, Judith, Karina and Cathia singing “Never Gonna Get It”.

Next we get a day in the lives of the contestants, starting with Michelle who is overwhelmed with the attention she gets. Next, Danielle really enjoys wardrobe. The Swon Brothers get a little primping in their suits. Next, the top three head to the final photo shoot and when they get there, they are surprised with a brand new car. The Swon Brothers decide that they will have to punch it out to decide who is going to get the car.

Danielle hits the stage with one of her favorite country artists, Hunter Hayes singing “I Want Crazy”. What a terrific pairing, love these two together, they have great chemistry. If Danielle doesn’t win this whole thing, I will be surprised.

Michelle has brought back Josiah, VEDO and Catha to sing “We Can Work It Out” with her on stage.

What would it mean to win The Voice; Danielle thinks it would be crazy, Michelle says it is about the people who have put the time and energy into everything, The Swon Brothers want to win it for their family and their home church.

Cher is up next and OMG what a horrible outfit and that hairdo, yikes! Back on track here, I got blinded by how ridiculous she looks, she is singing her new song called “Woman’s World”. I never thought I would compare Cher to Madonna, but these days, not much of a difference between the two. They are both trying to desperately get back their youth by dressing in outfits that are way too young for them and just cannot compete with women over half their age.

It all comes down to this, there is only five minutes left of the show and now the time has come. First they are going to reveal the artist in third place, The Swon Brothers.

One of the women is The Voice, the winner of season 4 is Danielle Bradbery. The youngest person in the competition has won and she is so thankful. Blake is on stage with Danielle’s mother. The stage is Danielle’s for her solo performance, but she is having a hard time, being so overwhelmed with her win.