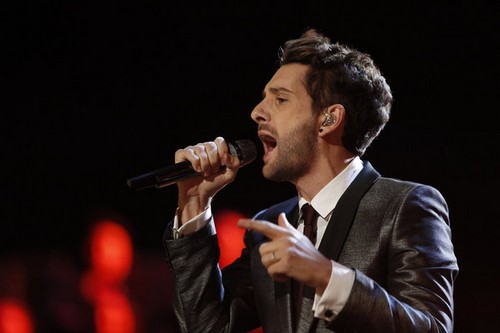 Will Champlin took the stage tonight on THE VOICE for his Top 3 finale performance and his Blind Audition Reprise song choice.  Team Adam’s Will Champlin sang “Not Over You” by Gavin DeGraw.  Tonight’s show the remaining artists from each coach, Christina Aguilera, Adam Levine, CeeLo Green and Blake Shelton team performed live for America’s vote and the chance to win the title of ‘The Voice.’

Judges Comments: “Adam says the Will works too hard and it’s very stressful; he can’t imagine how it would be in his head and that his hard work is inspiring yet it’s exactly why he’s in the finals because he has such a strong passion for music. Adam has a ton of respect for him and is just all around impressed with how he has gotten through a lot of hurdles in the competition. Christina says that she agrees with Adam that he’s been on an amazing journey; she does see how he over thinks and is a perfectionist. She believes that he has gone through a lot of struggles and is proud of him to be in the top three.”    Don’t forget if you want Will to win the voice you have to vote for her.