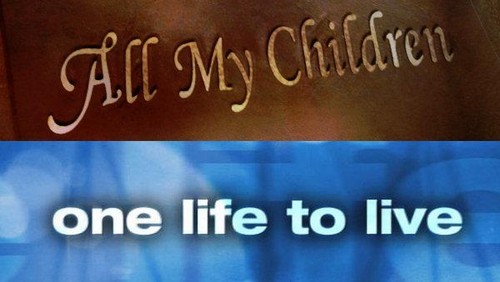 When ABC first pulled the plug on two of its’ soaps back in 2011 an instant rallying began from the fans lead by GLOBE Magazine. Prospect Park heard them loud and clear and devised a plan to bring All My Children and One Life To Live back to life, somewhere. They started planning almost immediately, to reboot both shows on their Online Network. There was a false start in early 2012 that made fans think their shows would be back very quickly but in actuality it took PP another year to work out all of the kinks. By April of 2013 both AMC and OLTL were airing online in 30 minute increments.

There were problems right from the jump and it seemed that PP was tweaking the format almost immediately. Within a few months production on both shows had been halted and PP had sued ABC for breach of contract. After months of silence and leaving actors to confirm that the shows were dead, PP finally has filed for bankruptcy. According to the March 31st print edition of GLOBE magazine it is now painfully clear that neither AMC nor OLTL has a snowball’s chance in hell at being revived again. ABC proved that while they were willing to loan out the characters they weren’t really willing to let anyone else breathe life into them. This begs the question of whether ABC really wanted AMC and OLTL to survive at all? Did they just allow Prospect Park to attempt to revive the popular shows as a sop to fans knowing all along they were going to undermine the show’s viability, killing off key characters right in the middle of storylines?  ABC could be tangled in court with PP for years and in the meantime it’s the fans that are missing out.

Some say that watching AMC and OLTL unravel has prompted fans to watch the other shows still airing on network television. They realize now that it’s a numbers game and they don’t want to see the whole genre disappear. Have you turned to other shows in an attempt to replace AMC and OLTL? Tell us your thoughts in the comments below!