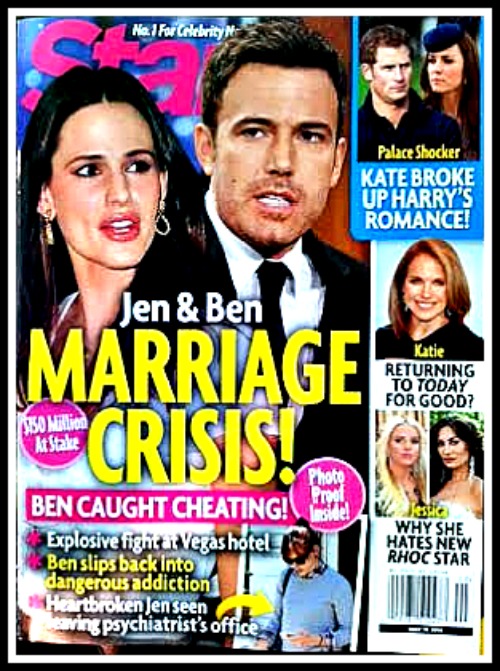 When Ben Affleck was kicked out of the Hard Rock hotel last week for card counting, there were concerns that his old gambling addiction was kicking in. And now, the latest cover story for Star Magazine supports that, claiming that not only has Ben’s gambling habit kicked back in, but he’s also sliding back into other dangerous habits.

Apparently, he’s also started drinking and partying again, and according to reports, he was even caught cheating on Jennifer Garner. Considering that they were both in Vegas together, Ben would have had to be pretty blatant to cheat on her in the same hotel, no? But when someone gives into their addictions, logic and common sense usually get thrown out the window.

Regardless, Ben and Jennifer reportedly had an ‘explosive fight‘ at their Vegas hotel, with Jennifer leaving and threatening Ben with a divorce. She was later spotted visiting a psychiatrist, causing fans to wonder whether she was seeking therapy over her husband’s situation. It can’t have been easy for her, seeing Ben slide into his old habits when she’s worked so hard to keep their family together. She’s the one who usually stays home while Ben works on his movies, and she’s usually the one that makes sure that he spends time with his family. She’s also the one who keeps traveling with him to movie sets, so obviously trust is still a major issue – and understandably.

And in the end, this is how she gets repaid. She gets to go to Las Vegas on a couple’s vacation, where she has to sit and watch her husband gamble – and not only that, but get humiliated for card counting. Then, she has to [supposedly] watch him cheat on her, but even if that didn’t happen, I’m guessing the part where they got kicked out of Hard Rock was humiliating enough.

However, is she angry enough to start divorce proceedings against him? After everything she’s put up with, I highly doubt it. No, she’s tough and she’ll endure a lot worse before she even thinks about divorce.