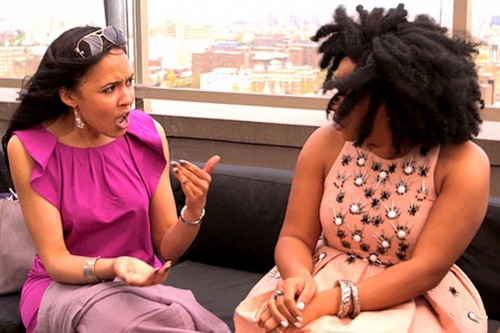 Tonight on Bravo their new reality show BLOOD SWEAT AND HEALS premieres.  On tonight’s premiere episode called, “Six in the City,” six New York power women are striving to make it, and striving to agree on the big issues.

On tonight’s show six New York City career women rely on the support of their girlfriends as they climb to the top — in their stilettos of course. These movers-and-shakers include video vixen turned real estate agent Melyssa Ford, modeling agency owner Mica Hughes, affordable-style expert Daisy Lewellyn, real estate partner Brie Bythewood, “A Belle in Brooklyn” blogger and author Demetria Lucas, and style and pop culture journalist Geneva S. Thomas. When the ladies get together to attend an afternoon soirée hosted by Daisy, a conversation about relationships turns heated, and Demetria takes to the web to voice her opinion. Once the other ladies discover the blog, the repercussions threaten to change these friendships forever.

From Harlem to Brooklyn, life in the big city often resembles a small town when the women cross paths in their personal and professional lives. The self-starters built their reputations and successes without the help of a man, but they never underestimate the power of a girlfriend’s support.

Tonight’s episode is going to be another drama packed one, which you won’t want to miss. So be sure to tune in for our live coverage of Bravos’ Blood Sweat and Heals Season Premiere – tonight at 9PM EST! While you wait for our recap, hit the comments and let us know how excited you are about the new episode of RHOA tonight.

The Season premiere of Blood, Sweat, and Heals opens with Melyssa, Flo Rida’s ex-girlfriend and a retired video vixen. She has just started a real estate career, and hopes to make her first sale.

Mica, the owner and operator of Mica Model Agency is starting her day off with her boyfriend Terry and her pet chinchilla Rocky (named after Barack Obama).

Melyssa is with her boss Jen, in a beautiful penthouse. She is practicing showing off the penthouse and what she would say to a potential buyer.

Demetria, a relationship guru and author, is heading out with her fiancé Greg. They are going to pick up a new couch that they recently purchased.

Daisy recently moved to New York form Los Angeles, to pursue her career as a style expert. She is working at an expo and interviewing philanthropists for “Just Fab.” She runs into Demetria at the expo, and Demetria is concerned about Daisy’s love life, because she isn’t sexually active.

It’s time for Brooklyn Brunch Series, Mica, Demetria, and Daisy, and some of their friends get together every Sunday. Demtria is getting her make-up done by her personal make-up artist for brunch, and her friends Brie and Geneva arrive. Geneva brings along a bag of sex toys that her Mom sent to her.

After brunch Daisy and all of her guests head up to the roof. Daisy has a microphone and basically puts on a talk-show, Geneva jokes that “Daisy thinks she is Oprah.” Demetria is annoyed, Mica is already drunk, and Daisy is asking everyone “stupid questions.” Demetria is not impressed that Daisy thinks that men should be leaders, not women. The conversation gets heated, when Daisy brings up cheaters during her faux talk-show. Demetria has never been cheated on, and she thinks it is ridiculous for women to go through their men’s stuff and look for signs of cheating. Everyone begins arguing loudly with Demetria, and Daisy is offended that Demetria is talking to her friends like they are stupid.

After brunch Terry picks up Mica, Geneva, and Brie. They head back to Mica’s house to discuss their argument with Demetria. Mica confesses to her friends that when she first met Terry, he had cheated on her. She found out that he never invited her to his house because he had been with another woman for twenty years. Mica confesses that Terry still speaks to the other woman, and it really bothers her. After they get done eating, they practice some dance moves on the strip pole in Mica’s house.

Demetria heads home to her fiancé Greg. She fills him in on the argument she got into at brunch with the girls about cheating, and that Daisy thinks that women can’t be leaders. Demetria is shocked that “professional black women” are really thinking like that. Demetria gets on her computer to write a blog post for her website about the shocking conversations she had at brunch.

Daisy heads to the salon to get her first Brazilian wax. In the middle of her agonizing wax Mica calls and says they need to chat. Daisy invites her for a pedicure, and Mica joins her at the salon. Mica breaks the news to Daisy that Demetria wrote about her on her blog. Daisy, Melyssa, and Geneva are NOT happy with Demetria’s blog. She called them “crazed” and made fun of what they said.

Geneva drops a bomb to Melyssa. She says Demetria is a hypocrite. Demetria made them all out to be crazy for “snooping” on their boyfriends, and said that she has never been cheated on. Geneva knows for a fact that is a lie, and Demetria has called “the other woman” on the phone before when her boyfriend cheated on her.

Daisy wants to speak to Demetria in person about the blog. She sends out a mass-text to Mica, Demetria, Geneva, and Melyssa and invites them all to dinner. She wants to attack the problem head on…