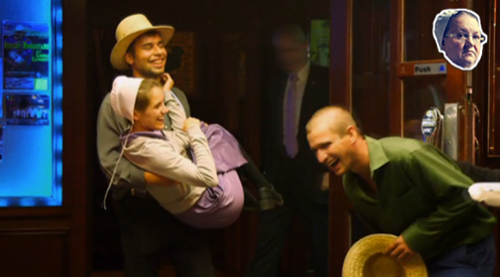 Tonight on TLC Breaking Amish returns with an all new Thursday October 9, season 3 episode 4 called, “House Divided.” On tonight’s episode the group visit Central Park and the Statue of Liberty to relax, but the mood is spoiled by an unexpected arrival. Meanwhile, Matthias mulls telling his wife about a recent transgression.

On the last episode, after spending their first night in a youth hostel in Brooklyn, the group set out to explore the city ended up a the episcenter of New York: Time Square. But, the spectacle of Time Square didn’t prepare them for the drama that was about to unfold. Did you watch the last episode? We recapped it all right here for you.

On tonight’s episode Matt’s lies threaten to tear the group apart unless he comes clean to his wife about his hook up. To move past all the drama the group explores Central Park and the Statue of Liberty, but an unexpected guests arrival pushes things to a boiling point.

On tonight’s episode of Breaking Amish, Matt told his wife about his time with Miriam and she was furious. This was what feared was going to happen from day one. And he lived up to expectation. However Matt doesn’t really get the full gravity of what he did. In his mind his wife shouldn’t be too harsh on him seeing as she once cheated on him. It’s quid pro quo!

Yet things are different now. He and his wife are expecting a baby. And it’s time that child became both of their priorities. Like, ok, you didn’t know each other all that long before you got married but does any of that really matter with a kid on the way?!?!

After Matt had apologized to his wife, he then went to everyone in the house to express his regret. Even taking a minute alone with Miriam to make sure they could still live together harmoniously. He doesn’t want them to feel uncomfortable in New York and no one travelled that far to deal with drama. Though drama appears to be following them wherever they go.

Vonda had been doing better with the group. She was talking and opening up then all of sudden something changed when she got a text from back home. Her sister had told her that members of their family had all but been shunned. So her new friends told her if that’s going to affect her (make her withdrawn and sad) then maybe she should call the bishop.

No one has ever dared to stand up to a bishop. It’s runs things like it’s his own fiefdom so Vonda’s decision to call and rant at him – took bravery. But it might just get her family shunned for real this time!

Speaking of family, Matt came clean about his past. He admitted to everyone that he was adopted and that his darker skin color has always affected him growing up. He never felt like he belonged in the Amish community so the group devised a plan to help reconnect him with his roots.

They found a Bulgarian restaurant and though the food was good Matt also found out some things he wish he didn’t. Because he’s always known he’s from Bulgaria – he simply thought they all must look like him and it hurt when he found they didn’t. Bulgarians for the most part are whiter than he is. The Gypsies on the other hand is most likely who he takes after. They tend to be of darker skin and in most cultures they are of the lower caste.

So Matt felt like he was rejected again. And it wasn’t until they found a gypsy Bulgarian that Matt felt like he could get his confidence back. While everyone looks down on gypsies – it’s a fact that these groups of wanders have never lost their traditions in over a hundred years.

And Matt could see himself like that. He loves to travel and the one thing that’s managed to stay with him always is his love of music. Though it’s odd his great loves aren’t his wife or his unborn son.

Miriam and Bates got into a fight at the club they all went to. Yet they soon wanted to forget the whole mess seeing as it was causing tension. Plus Miriam had dropped a bombshell on her friends. She told them that she might return home sooner than everyone else.

She misses her son and things with Matt is still weird. So she’s not enjoying her time in the house with the married man she slept with and the guy she fought surrounding while the son she misses the most is miles away. Then things get worse for her when Matt’s wife decided to surprise him by flying up for a visit with her mother.

Matt had forgotten to tell his friends his wife was pregnant and the girls that were just starting to forgive him for lying about being married – turned against him. And Matt didn’t win himself any favors when he later introduced his wife to Miriam and let Courtney got at an innocent woman.

Everyone believes the incident was his fault and they don’t think Miriam should be blamed.