BY Heather DiPietro on May 12, 2014 | Comments: one comment
Related : Charlie White, Dancing With the stars, DWTS Videos, Reality TV, Television 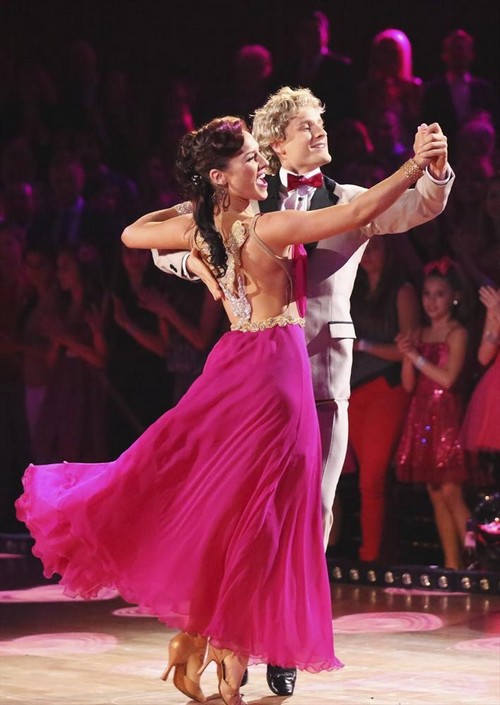 Olympic Ice Dancing Gold Medal winner  Charlie White danced a Samba to Mo Money, Mo Problems by Notorious B.I.G., on tonight’s season 18 episode 9 of Dancing with the Stars with Sharna Burgess for their DWTS semi-final performance. Emmy Award winning director and choreographer Kenny Ortega makes his “Dancing With The Stars” debut as a guest judge on American Icons Night when he sits alongside Len Goodman, Bruno Tonioli and Carrie Ann Inaba  If you missed tonight’s show you can read a full and detailed recap, right here.

On last episode Charlie performed a Argentine Quickstep and Bruno loved it saying, :  “He was out the starting block like a thoroughbred at the Kentucky Derby.  Precise footwork. Absolutely delicious.”  They scored Charlie 40/40.

Charlie White and professional dancer Sharna Burgess: dancing a Samba.  Charlie has been getting ready for his dance tonight.  He has been on the road performing quite a lot this past week with Stars On Ice.

Judges comments: Kenny: “I thought it was clean, committed and precise.  Lacking a bit of funk.”  Bruno: “Samba is about carefree fun.  But Kenny is right you have to hit the rhythm stick.”  Carrie Ann: “I am a little sad you are in jeopardy.  I want to live in Charlie’s world the joy you have is what dance is all about.  It was a little flat footed.”  Len: “It looks a little heavy at times.  Tonight is all about who deserves to be in the finals and you deserve to be in the finals.”