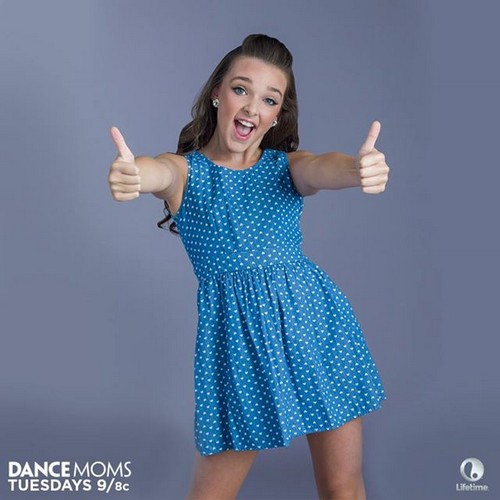 Tonight on lifetime Dance Moms continues with a new episode called, “No More Crybabies.” On tonight’s episode, the dance company visits Michigan, where the three youngest members go head-to-head to see who will be competing in a solo at Nationals. Meanwhile, Abby learns that Jeanette is bringing Ava to compete against them, so she plots to secure the win and causes a fight between the ALDC moms.

On the last episode tensions were high when Abby swapped Chloe and Christi for the Select Team’s Jade and Loree in the third head-to-head battle between the Elite and Select teams in Washington, D.C. Both teams were anxious to impress Abby when she announced that Nationals were just five weeks away. Jeanette and Ava are thrilled to compete in a solo against Maddie until it became obvious that the odds were stacked against them. Did you watch the last episode of Dance Moms? If you missed it, we recapped it all right here for you.

On tonight’s episode The ALDC heads to Michigan, where Abby has her three youngest members McKenzie, Tea’ and Sarah go head-to-head to see who will be competing in a solo at Nationals. When Abby finds out that Jeanette is bringing Ava to compete against them, she concocts a secret plan to try and secure the win and causes a blowout fight between the ALDC moms.

Tonight’s episode is going to be another drama packed evening, which you won’t want to miss. So be sure to tune in for our live coverage of Lifetime’s Dance Mom’s Season 4 Episode 26 – tonight at 9 PM EST! While you wait for our recap, hit the comments and let us know how excited you are about the new season of Dance Moms tonight!

RECAP: On #DanceMoms, Sarah is back for a class and Abby hears that she’s doing better but Abby hates her mom. There’s just a few weeks until nationals and she admits she may need Sarah. Abby calls the girls in and then congratulates Chloe and Tea for dancing with the select group and winning. It’s time for pyramid but she calls in Christy. Abby says it’s more of a totem pole this week. Nia is at the bottom for poor characterization.

Mackenzie is next because she’s pulling focus by moving out of sync. Kendall is next for turn-up issues. Tea is next for general reasons. Chloe is next and at the top is Maddie, as usual. It’s Energy National Dance Competition this week. She tells Mackenzie she’s got a solo and it’s a blues number called Out of My Mind.

The next solo goes to Sarah with a lyrical called On My Own. She says it’s a shame her mother keeps her from being independent. Christie doesn’t like this at all and thinks she shouldn’t be allowed back. Tea gets a musical theater piece called No Crybabies. She reminds her of Ava’s tantrum and says it can’t happen on the team again.

She tells the girls she’s checking out all the little ones this week and the losers are out of the running for nationals. The group routine is an ethnic piece called Tribal Council and Nia gets the lead. Nia is so thrilled and gets the feathered headpiece. It will have contemporary, acro, gymnastics and other elements. Sarah and Tea aren’t in the group number so they can focus on their solos.

Abby hears that Ava will be competing against them and finds this very interesting. Abby is thinking about putting Maddie in as a ringer at the last minute if she needs to. Christy asks about this and Holly says Jeannette is being selfish pushing Ava into this younger competition to get her in front of Abby and try to get her back on the team.

Holly is thrilled that Nia has the lead instead of Maddie and wants her to look fabulous. Abby is pushing Nia for more presence. She tells her she’s not giving her enough and tells her to be more like Maddie. Abby says she has to step it up or go.

Abby tells Sarah she has a shot since she’s nine or under but the other two girls will be dancing against Ava and it will be harder. Abby says it’s rotten what Jeannette is pulling. She works with Sarah first on her solo. Mackenzie is next with her funky little jazz routine. Abby applauds her. Tea is up next with her musical theater number.

Abby works with her on her tantrum themed number and tells her to sass it up. Christie starts her usual naysaying and asks if it has enough quality choreography. Holly says putting Tea against Ava isn’t good. Christy says this will be a tough competition. Back on group, Abby yells at Nia to perform. Then she puts Maddie to work doing it and shows her how to do the face work.

Abby says she doesn’t know what to do to fix it. She says they only have a few weeks until nationals and threatens Nia’s spot on the team. Melissa says she thinks Nia is doing a good job but Holly says Abby is promoting Maddie at Nia’s expense. Melissa says she isn’t doing anything to her and is frustrated.

Abby comes to talk to Holly who is upset at her. Abby says she’s trying to pull something out of her daughter. Holly gets angry and says – all right, whatever. It’s competition day and everyone is getting onto the bus. Christy is riding along but will be sitting up front. Sarah is scared about sitting in the back. Abby tells her to go to the back and stay put.

Sarah starts crying and her mom tells her to go back and be independent. Abby tells her to quit acting like a baby and go to the back. The other moms try and help. Holly tries to help so that Abby won’t kick her off the bus. Abby starts yelling at her and says she won’t deal with crybaby crap anymore. She says Sarah has a lot of learning to do.

In Waterford, Michigan, the bus pulls up and Abby’s fans greet them. We see Ava and Jeannette are there. Abby says she won’t let them go home with a victory over them. The kids go check out the stage and Christie asks if they’re nervous about solos. She is always stirring up trouble. Christy says Sarah is worried about the emotion. Melissa thinks Ava is doing a solo she learned months ago.

Tami doesn’t like that they are harping on Jeannette and goes to find her friend. She and Jeannette hug and she tells her all the gossip. She tells her to stay clear of the Abby Lee moms to minimize drama but Jeannette makes it clear she’ll do what she wants to do. Abby preps the girls for their group dance. Abby says if Nia doesn’t play up the character, she won’t make it to nationals.

The girls come out, they’ve got their drum. Nia is excited and nervous because she doesn’t get a lot of featured roles. The number starts and it’s very high energy. They all look great and very polished. Nia looks pretty fierce. It’s very different from anything else I’ve seen them do. The audience seems to love it. Holly thinks it was great and that Nia did a great job.

Now the younger girls prep for solos. Sarah is competing in the petite category. She’s more worried about Tea and Mackenzie since they are competing against older girls. She tells the girls not to screw up. Sarah is up first with On My Own. Christy is very excited about it and thinks her daughter’s solo is beautiful and will land her a spot at nationals. It looks lovely.

She’s all angles. Abby says she did a good job but all I see are angles. Abby gives the girls feedback on their solos but overall it was positive. She asks Melissa if Maddie has a costume and tells her to get it on. Melissa is shocked that she would throw her into the mix at this point and rob her daughter of the chance at a win. Maddie does her number from the last competition. The crowd goes wild.

Abby doesn’t care if the moms are angry and says she wasn’t going to lose to Jeannette no matter what. Melissa says Maddie told her to bring her costume just to freak Ava out backstage. Christie stirs the pot. Jill says there should be a point where it can’t be all about winning. Melissa doesn’t see it that way. Jill thinks Melissa threw one daughter under the bus in favor of another. Christie is a troublemaker.

Holly says Melissa robbed Mackenzie of an opportunity. Sarah takes first place in the petite category. Then in the junior category, fifth goes to Tea. Tami is upset. Third goes to Mackenzie. First and second were separated by only one point. Ava takes second and Maddie wins it yet again. In the group division, the girls win first place.

Holly says this shows that Nia can be a winner and the five original team members can bring home a win. Back in the dressing room, Abby comes in and congratulates the girls. She tells Nia she looks fabulous and says she’s proud of her. Holly asks if she’s made it to nationals. Nia really wants nationals. Christy asks if Sarah can get a solo at nationals.

Abby says if it’s nine to eleven, she’s going to use Maddie. She says Sarah isn’t strong enough to go with out her mom. Then Jeannette and Ava come into the room. Christie isn’t happy to see her. She asks what she’s trying to do by stalking Abby. Then Abby tells her she should have contacted her and asked permission before entering her into the competition since she’s on her select team.

She kicks Ava off the select team and Jeannette is floored. Tami steps out to go to the bathroom but actually chases her friend down. She tells her she could have avoided this but Jeannette says she didn’t have a choice. She says her hands were tied but Tami thinks she should have heeded her warnings. Abby tells the others they have two more competitions before nationals and she’s still not sure. She heads out.