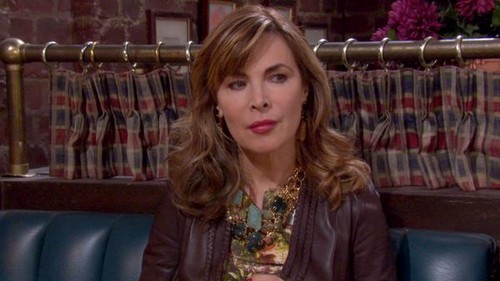 Days of Our Lives spoilers for the week of October 6-10 reveal that the drama is really heating up in Salem, and storylines are starting to pick up momentum. Kristen DiMera continues to scheme to get her way, there is trouble in paradise for a few couples, and the power struggle over DiMera Enterprises continues.

Monday October 6: According to Days of Our lives spoilers for Monday, Paige continues to snoop around at the hospital after hearing that Kayla was raped, and questions Kayla about JJ’s dad Jack. Meanwhile across town, Kristen DiMera pays Brady Black a visit and lets him know that she is still very determined to win him back over. And, she even tries to guilt him in to taking her back since she helped bring his father out of a coma.

Tuesday October 7: JJ and Paige seem to always come out on top, regardless of what kind of curveballs are thrown at them, their relationship is pretty much bulletproof. But, DOOL spoilers tease that on Tuesday October 7th it might be the end of Salem’s hot teen couple and Paige has had enough of JJ’s behavior.

Wednesday October 8: Wednesday’s episode of Days of Our Lives brings a heart-to-heart between Caroline and Sami. Spoilers tease that while Sami and Caroline are bonding, Will is shocked by one Salem resident’s behavior. After sitting down with Chad DiMera to interview him for his next article, Will is thrown off by just how angry Chad is at his older brother EJ.

Thursday October 9: Days of Our Lives spoilers tease that on Tuesday October 9th, EJ and Clyde bump heads once again over DiMera Enterprises, and EJ “lays down the law.” While Clyde is getting chewed out by EJ, his kids Ben and Jordan are in a heated battle as well… with themselves.

Friday October 10: On Friday’s episode of DOOL, Rafe has a heart-to-heart with his old flame Kate and warns her that she is making a huge mistake canoodling with Clyde. Clyde’s daughter Jordan has been doing some canoodling of her own and heads out on a date with Chad DiMera. Meanwhile at the park gun shots ring out, and Sami gets shocking news.

So DOOL fans, do you think this is the end of JJ and Paige? Who do you think gets shot this week, is it EJ? And more importantly, if it is EJ, who did the shooting? Let us know what you think in the comments below and don’t forget to check CDL tomorrow for more Days of Our Lives spoilers.

Fans at Soap Opera Spy Facebook page fear Clyde may be the death of EJ!

Kate is stupid to have a date with Clyde

probably be the one to shoot ej.if he’s the one that get shot.I don’t think it will be over for Paige and jj

Oh no….it looks like EJ will get shot and die, since James Scott is off the show any day now I will MISS HIM!

We know James Scott is going – just a matter of how and when.