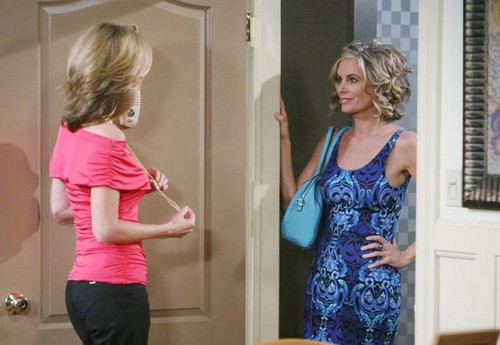 Days of Our Lives spoilers for the week of October 20 tease a week full of drama on the NBC soap opera. Some of our favorite Salem couples’ relationships crash and burn, while a few sparks fly between new potential couples. EJ DiMera’s death continues to effect his friends and family, and spoilers reveal a few unexpected connections are made as a results of Elvis’s death.

Monday October 20: DOOL spoilers tease that on Monday October 20 Kristen and Daniel have a secret pow-wow regarding Theresa Donovan attacking John Black and framing Brady. Unfortunately, Jenn finds Daniel and Kristen together and is floored, and assumes they are romantically involved. It looks like a Dannifer reunion is still a long ways away.

Tuesday October 21: According to Days of Our Lives spoilers, DOOL fans can expect to see Will and Sonny in a serious fight over Will’s latest article on Chad DiMera on October 21. Meanwhile across town Kristen is determined to prove that Theresa is guilty, and tries to trick Eve and Anne in to confirming her theory about Theresa’s involvement in John’s assault.

Wednesday October 22: Sparks fly between Jordan and her estranged dad Clyde on October 22nd, and DOOL spoilers reveal that he makes a shocking accusation. Also, Kristen DiMera’s quest to win back Brady after their disastrous almost-wedding hits a major snag.

Thursday October 23: Days of Our Lives spoilers reveal that on Thursday’s episode of the NBC soap opera, JJ prepares to tell his girlfriend the truth about his father Jack Deveraux and his Aunt. Meanwhile, Will and Sonny’s marriage continues to crumble as Will confesses that his hubby doesn’t respect him and some hateful words are said between the young couple, that can’t be taken back.

Friday October 24: Days of Our Lives spoilers reveal that on Friday’s episode of the soap opera DOOL fans will see Sami and Nicole share an unexpectedly close moment over drinks, and after a heart-to-heart Nicole gives her frenemy some advice.

So Days fans, do you think there is any chance of Daniel and Kristen hooking up or do you think that Jenn is just being paranoid? Do you want Jenn and Daniel to get back together? Is this the end of Sonny and Will, or will they manage to work through their issues? Are you excited to see Sami and Nicole together? Let us know what you think in the comments below and don’t forget to check CDL tomorrow for more Days of Our Lives spoilers.