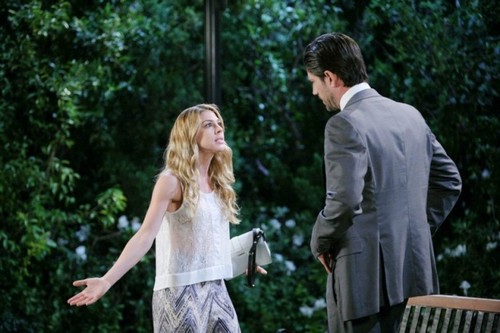 Days of Our Lives fans have been anticipating a major storm headed towards Salem, knowing it was only a matter of time before Sami found out her fiancé EJ had an affair with Abigail Deveraux. It really is amazing that EJ and Abigail had managed to keep their affair a secret as long as they did. First, there was the nail-biting drama when Abigail thought she was pregnant and there was a chance the truth would obviously come out, and then Nick Fallon had photos of their tryst and threatened to out them (lucky for them, Gabi eliminated that problem), and we can’t forget about the intense dream sequence when EJ dreamt that Sami had learned of the affair.

On the June 18th episode of days of Our Lives, Sami discovered photos of Abigail and EJ kissing, the same photos that Nick Fallon had attempted to blackmail the scandalous cheaters with. If the dream sequence EJ had about Sami finding out about his affair was foreshadowing what is to come, there is going to be some serious drama in Salem!

Sami is a schemer, so there is a chance she may not reveal right away to EJ that she knows he had an affair with Abigail. She might use the affair as leverage later on. Then again, Sami will most likely be too furious to put on a poker face and act as if the affair never happened. Will she be furious enough to turn on EJ and out some of his illegal activities, like paying a hit man to take out Nick Fallon and then “taking care of” the hit man to cover up what happened?

What do you think will be Sami’s next move? Will she use the affair as leverage to get something she wants from EJ, or will she be so upset she turns on him and reveals his latest criminal activities? Do you think there is any chance Sami will forgive EJ? Rumors emerged weeks ago when James Scott announced he was leaving the show that his character was going to be killed off, do you think Sami might kill him in a fit of rage? Share your thoughts and theories in the comment section below and don’t forget to check CDL for all of your Days Of Our Lives spoilers.

The well-informed fans at Soap Opera Spy have the following comments on this story arc:

Since Ej and sami are leaving the show… I wonder..if sami does kill Ej and she goes to prison with Gabi

How many times has Sami shot EJ now, it’s at least two right.

It was Sam’s bag. I recognized it from her using it in other scenes. And I think it was great that the writers have it that Sami knows already about their affair! In was a different twist for a change. I have a feeling she is going to pull something at the wedding to embarrass them both. I saw Alison Sweeney being interviewed on one of the talk shows and she said that her chapter “Sami” is going to be more out of control than ever before during her last few months on Days!!

I don’t think she will kill him

Jennifer’s shoulders are bigger than Daniel’s shoulders. She really needs to wear sleeves. Looks horrible. She looks like a football player. Can’t stand that Sami & EJ are gone. If they are going to show a lot of Miss Football Shoulders I’ll be gone for sure.

Don’t think she will kill him. She has her children especially Johnny.

Well since we don’t have the DOOL script we can’t say for sure how this story will play out – but CDL will certainly keep you updated on everything we learn about it.