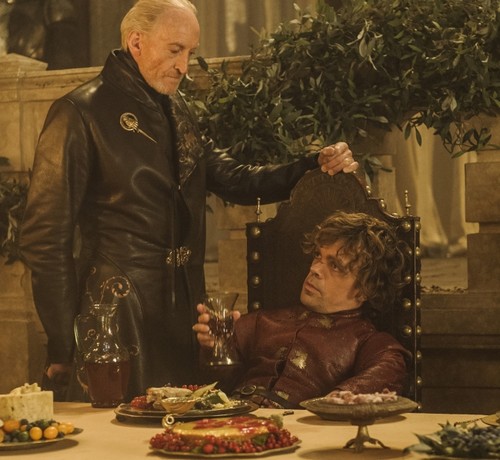 On tonight’s show Joffrey’s brother Tommen was crowned King. Tywin and Cersei decided on a plan to marry Tommen to Joffrey’s widow Margaery Tyrell after a respectable mourning period.  The Lannisters need the Tyrells because the House of Lannister is in debt to the Bank of Braavos.  Daenerys learned that King Joffrey had died.  She chose to postpone her journey towards Westeros to go back to make sure all the slaves she freed were still free.  Pod and Brienne rode onward to look for Sansa.  The Night’s Watch successfully overtook Craster’s Keep.  More happened, did you watch tonight’s show?  We did and we recapped it for you HERE!

Spoiler alert: If you’re one of those people who doesn’t like spoilers, stop reading now! We have some juicy spoilers for you about the season 4 episode 6 HBO’s “Game Of Thrones.”

HBO’s Official Synopsis: “Stannis (Stephen Dillane) and Davos (Liam Cunningham) are going to set sail with a new strategy. Dany is going to meet with supplicants. Tyrion (Peter Dinklage) will face down his father in the throne room. The episode was written Bryan Cogman, and it was directed by Alik Sakharov.”

On next week’s show Tyrion faces his father in the throne room for his trial; Stannis and Davos put their faith in a new strategy; Daenerys’ sphere of influence expands.  Theon’s sister comes to find him.  Vary informs the Lannisters that Daenerys Targaryen has an army. Daenerys makes plans for the future.  She tries to decide if she has enough men to take Kings Landing.  The episode was written by “Game of Thrones” series creators David Benioff and D.B. Weiss.

The Game Of Thrones Season 4, Episode 6“The Laws of God and Men” airs on HBO on May 11th, 2014. Check out the preview videos from episode 6 below and let us know in the comments below what you think!