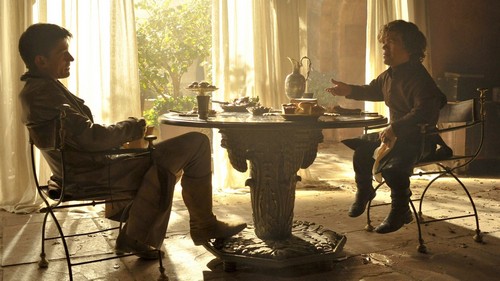 On tonight’s show Tyrion faced his father in the throne room for his trial and soon realized they were not ready to listen to the truth.  Stannis and Davos put their faith in a new strategy; Daenerys’ sphere of influence expanded.  Theon’s sister, Yara came to find him.  Vary informed the Lannisters that Daenerys Targaryen had an army but they did not seem to care. Daenerys made plans for the future.  She tried to decide if she had enough men to take Kings Landing.  Ramsay Snow decided to use Theon/Reek.  Shae betrayed Tyrion.  More happened, did you watch tonight’s show?  If you missed it, we have recapped it for you HERE!

Spoiler alert: If you’re one of those people who doesn’t like spoilers, stop reading now! We have some juicy spoilers for you about the season 4 episode 7 HBO’s “Game Of Thrones.”

HBO’s Official Synopsis: “Tyrion is going to enlists an unlikely ally. Daario (Michiel Huisman) will entreat Dany to allow him to do what he does best. Jon’s warnings about the Wall’s vulnerability are going to fall on deaf ears. Brienne (Gwendoline Christie) is going to follow a new lead on the road with Pod (Daniel Portman).”  The episode was written by David Benioff & D. B. Weiss, and it was directed by Alik Sakharov.

On next week’s show Jamie feels that Tyrion has thrown his life away because of his meltdown at the court last episode.  Tyrion tells him not to give up on him just yet, all is not lost.  Jamie is skeptical.  Peter Baelish’s wife is upset at Sansa.  If she keeps threatening Sansa she is not going to be around for long.  The title of next week’s episode is a reference to the personal sigil of Lord Petyr Baelish, the mockingbird. As Lord Baelish is the sole member of his house, it has become the sigil associated with House Baelish.

The Game Of Thrones Season 4, Episode 7 “Mockingbird” airs on HBO on May 18th, 2014. Check out the preview videos from episode 7 below and let us know in the comments below what you think!