General Hospital Spoilers: Helena Cassadine – With Murders, People Back From the Dead and Explosions, Is GH Jumping the Shark? 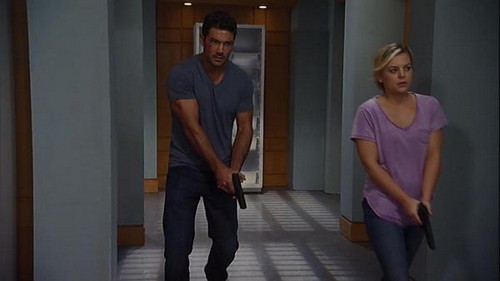 General Hospital spoilers teased that a few villains would be returning to the ABC soap opera this fall, but no one was prepared for all of the madness that ensued this week at Crichton Clark. Helena and Stavros Cassadine, and Jason Morgan were all miraculously brought back to life thanks to the modern medical miracles we have come to expect on General Hospital. But, are the GH writers pushing the realm of possibility a little too far these days, or “jumping the shark,” so to speak?

The last time we saw Helena Cassadine was in 2013 when Luke Spencer shot her in the heart, GH fans were sure that this time Helena was down for the count, there’s no way anyone could survive a gun-shot wound to the heart regardless of what kind of medical miracles they have up their sleeve. But, Helena managed to survive the fatal shot and Stavros recovered her body and placed her in a cryogenic chamber and she stayed “on ice” until she was resurrected by Victor Cassadine, thanks to Robin Scorpio Drake’s research.

Helena isn’t the only character who has managed to cheat death and return to Port Charles. This is actually the third time that her son Stavros Cassadine has returned from the dead and this time he was on a mission to recapture his “Ice Princess” Lulu. Stavros was killed in 1983 when he got in to an altercation with Luke Spencer and fell down a flight of stairs and broke his neck. In 2001 it was revealed that Helena had him “frozen” until she was able to find a scientific procedure to bring him back to life. Once Stavros returned to Port Charles, he continued to wreak havoc until he died once again and allegedly fell over a cliff to his death. But, he came back to life in 2013, when Luke allegedly killed him by trapping him in a chamber, which was the last time he was seen until this week when Victor Cassadine used Robin Scorpio Drake’s research and revived him once more.

If you are a fairly new member of the General Hospital fanbase, then this week of crazy events at Crichton Clark has probably left you a little confused. Back in the 1980’s the writers of General Hospital took the story in an unrealistic turn with Luke Spencer and the Cassadine family, and Luke and the Cassadines were fighting for the “Ice Princess,” the largest diamond in the world which was attached to a statue that had the magical ability to “freeze the world.” Stavros’s father Mikkos managed to “freeze” Port Charles and a deadly blizzard erupted in the middle of the summer. Luckily Luke Spencer was able to save the day and stop the deep freeze.

Between the never-ending Fake Luke storyline, the Cassadine’s resurrection, and all of the other ridiculously far-fetched storylines that have been going down lately on the ABC soap opera, it looks like the GH writers are trying to revisit the Ice Princess storyline from the 1980’s and the ongoing feud between Luke Spencer and the Cassadines, when ratings were sky high and fans worshipped Luke and Laura. But, how far are they really going to go before the sudsy daytime drama crosses the thin line they have been tinkering on and begins to appear to be a low-budget sci-fi movie?

The GH writers have been pushing the envelope ridiculously far lately, and fans are finding it difficult to follow some of the insane storylines. This year the writers tinkered with a vampire storyline, and then they introduced Fake Luke, who is such an amazing imposter his own fiancée had sex with him and didn’t even realize he was an imposter. As much as we love the Fluke twist, it makes no sense that not a single person has noticed that he isn’t really Luke Spencer. And now, the writers have brought half of the Cassadine blood line miraculously back to life. Stavros and Victor are supposedly dead again, but chances are they will pop back up, because apparently the members of the Cassadine Family are half bionic man.

As much as we love all of the action on General Hospital this week, the storylines are getting a little too far-fetched to keep us invested. What do you think about the miraculous resurrection of Helena and Stavros Cassadine? Do you think that they are linked to Fake Luke? Do you think the writers will really go as far as to bring back the “Ice Princess” storyline and freeze over Port Charles? Will Victor and Stavros miraculously come back to life? Let us know what you think in the comments below.