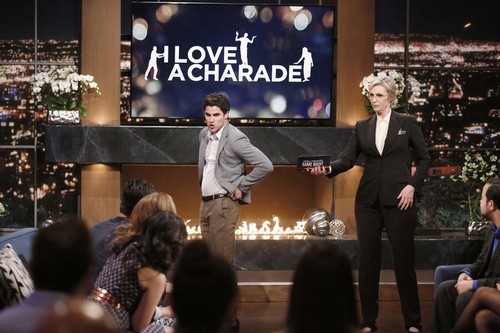 On last week’s episode two contestants lead a team of three celebrities, which included Nate Berkus, Adam Devine, Tony Hale, Arsenio Hall, Malin Akerman and Bradley Whitford in hopes of winning the $25,000 grand prize. A series of unique party games brought out the best, funniest and most competitive sides of some of Hollywood’s most beloved stars in this hilarious no-holds-bar competition hosted by Jane Lynch.  Did you watch last week’s episode?  If you missed it we have a full and detailed recap, right here for you.

On tonight’s episode two contestants will lead a team of three celebrities, which include Jenna Fischer, Darren Criss, Jason Biggs, Laura Prepon, Natasha Lyonne and Mario Lopez, in hopes of winning the $25,000 grand prize. The contestants will have to participate in outrageous games, that include quizzes featuring celebrity and popular culture.

And so another fun night, hosted by Jane lynch, begins. Tonight’s episode has Mario Lopez, Jenna Fischer, Darren Criss, and their Team Leader Chris Young going against what seems like half the cast of Orange is the New Black – Jason Biggs, Laura Prepon, Natasha Lyonne with their team leader TJ Morales aka the Boobs guy. Funnily, there’s a story behind that nickname — Morales actually was helping a star get back up on her feet after a fall and neither of them realized one of her boobs popped out. So in this case being a gentleman has paid off!

The first game of the night is “Movie Mash-up”. Basically it combines two movies to create a whole new poster and one of the players has to be quick enough to the buzzer to figure it out. But, and here is where a favorite stars mess up, they should at best know the answer prior to reaching for that buzzer.

Countless times there’s been someone there to get their team’s hopes up and yet they don’t know the answer. Even when it’s obvious to everyone else!

Jenna Fischer just couldn’t catch a break during that round. She kept trying and maybe it was the infamous pregnancy brains people talk about (no offence to other pregnant women), but she couldn’t get one single mash-up right. Luckily, her team was able to make up their lost ground in Round Two’s “Let Her Have It”!

In the second round, both teams were seated around a table with alphabetical blocks. They had to pick up a block starting with the letter that would match their criteria. For example, during the Fast food round Chris picked up M for McDonald’s. If someone got a wrong answer then that allowed the other team to play a bonus round of the game.

So that’s where the two teams were able to even out in points, but keeping up a good run is much harder than a lot of people would think. In the Third Round, they had to play “Timeline”. Timeline is when they’re given picture from pop culture and they have to arrange it to the date each show or movie came out. And while team Chris managed to get it right on the first try – the teams are given more than one chance to earn points. Team TJ failed on their first attempt and made a comeback with their second.

“Lil Picassos” ended up being the game changer. Lil Picassos is when the celebrities have to guess the identity of a picture. However, little kids were the creators of these pictures so it was difficult to guess where they were going. Like Vin Diesel does not have hair, but kids like to imagine he does! They’re simply sweet and imaginative like that.

Most of the contestants had no idea who the picture was supposed to be about and the only way they managed to guess was because Jane gave them all some much needed clues. And, hey, Team Chris was in the lead by 3 points by the end of the round.

In the last round of the night, everyone was forced into a game of charades. And Team Chris was on fire. They kept getting doing great and so it was left to Team TJ to play the game of catch-up. If they couldn’t then they would be dismissed.

Team TJ started Charades 3 points behind and when the game was finished; they were more than 20 points behind. And this is me guessing here — even if there was a bonus round they would still be the ones losing tonight!

Team Chris or better yet Chris Young is the winner and if she can win the “Celebrity Name Game”, then she won’t be the only one walking away with a bonus. She chose Mario Lopez to help her play and by helping her get six out of ten answers right – he received 6,000 dollars to donate to his favorite charity.

So Congratulations Boys and Girls Club of America – you’ve just received a donation!