BY Heather DiPietro on May 12, 2014 | Comments: one comment
Related : Dancing With the stars, DWTS Videos, James Maslow, Reality TV, Television 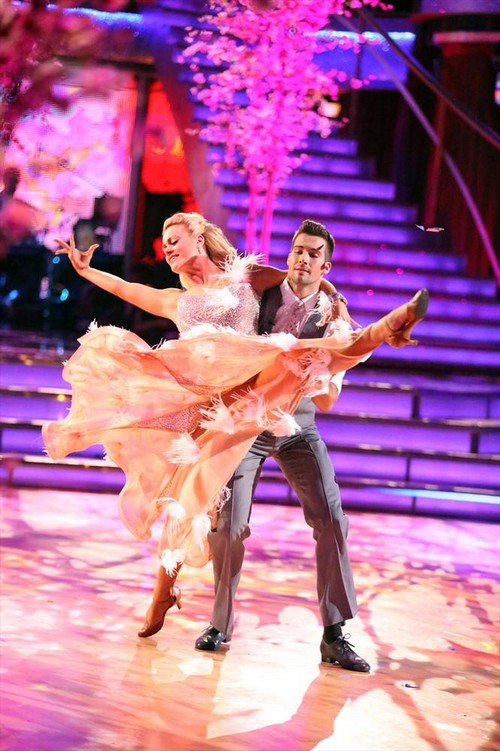 Singer and actor James Maslow danced a Rumba to Islands in the Stream by Kenny Rodgers/Dolly Parton, on tonight’s season 18 episode 9 of Dancing with the Stars with Peta Murgatroyd for their DWTS semi-final performance.  Emmy Award winning director and choreographer Kenny Ortega makes his “Dancing With The Stars” debut as a guest judge on American Icons Night when he sits alongside Len Goodman, Bruno Tonioli and Carrie Ann Inaba  If you missed tonight’s show you can read a full and detailed recap, right here.

On last episode James performed a Viennese Waltz and Carrie-Ann loved it saying, :  “James you are a special soul when you dance.  I agree with Len on your posture.  On top of that Peta’s foot came off the floor.” They scored Amy 36/40.

James Maslow and professional dancer Peta Murgatroyd: dancing a Viennese Waltz dance. James has been getting ready for his dance tonight.  James tweeted, “So cool of @LA_Reid to stop by rehearsal and give me some advice. What an amazing dude.”

Judges comments: Carrie Ann: “My contacts got a little foggy.  The Rumba is the sexiest dance.  You did not disappoint because your dancing was totally on par, it was well rehearsed. Its the determination and effort you put in.  I think you are the smartest competitor we have.”  Len: “You lose connection between your hands and your arms.  It lacked a little bit of expression, but your arms are a lot stronger. Overall it was good.”  Kenny: “You have to extend that sexy into your hands.  It was tight and sexy.”  Bruno: “I felt like islands in the steam.  Your determination is amazing.  You work so hard on your feet and it shows.”