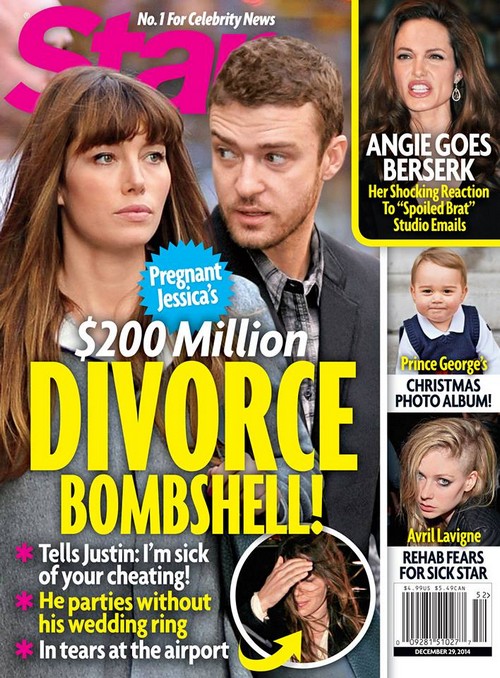 Jessica Biel is pregnant (see photos) and getting divorced from Justin Timberlake according to the latest cover of “Star” magazine. Her baby bump is already on full display and she is looking at a staggering $200 million divorce from the singer and actor.

Jessica Biel’s split from Justin Timberlake comes right on the heels of reports making the rounds that he’s been busy cheating on her behind her back. He’s been cheating on her for the longest time – even before they were married, so why does that matter now? It’s like she knew that he was a Cheater McCheaterson before she went and married him, so she obviously expected him to change.

Now that Jessica Biel is pregnant, you would think they would be able to work out their differences and stay together for the sake of the baby. Still, there is no time like the present, so she has told him that she is sick and tired of his cheating ways. Perhaps Jessica is thinking of the baby and the example Justin’s cheating would imprint upon their child.

Even worse, Justin has been seen partying it up without Jessica and another important thing in their marriage: his wedding ring! Oh snap. It’s only going to go downhill from there. Once a man takes off his wedding ring, it is only a matter of time before he goes and does something stupid. Wouldn’t it be crazy if Justin Timberlake got two women pregnant? Jessica Biel is pregnant, but what would happen if he had secretly gotten another woman pregnant? That would totally be the straw that broke the camel’s back in their marriage. She would certainly be in her rights to walk away from that douchemonster and no one would could put her down for the decision.

Jessica was said to be in tears at the airport and it’s probably because she learned something about her husband’s cheating ways. What do you think?

Jessica Biel shopping with a friend in New York City, New York on December 16, 2014. Jessica was hiding her baby bump under a large grey peacoat by FameFlynet