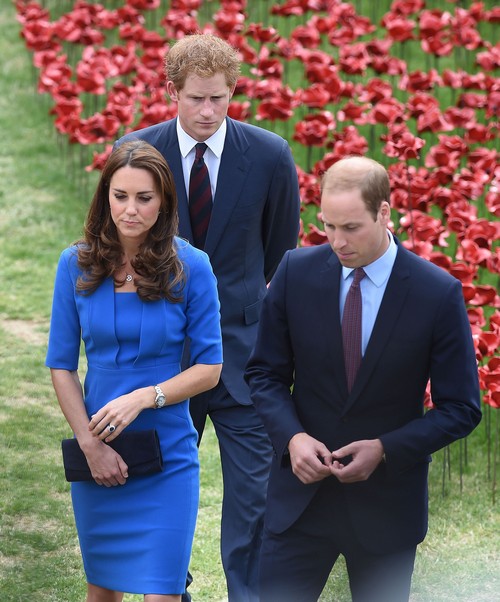 Kate Middleton has recovered from her morning sickness but her baby bump and bloating are more prominent – so The Duchess of Cambridge is tying to avoid public appearances and her royal duties despite Queen Elizabeth and the royal family forcing her to get over her vanity and get out and work! Kate Middleton got a lot of backlash when she pulled out of several scheduled public appearances earlier this month, even though she had good reason for it. Kate is suffering from Hyperemesis Gravidarum, which is a severe form of morning sickness that affects pregnant women in their first trimester. It was revealed that she was pregnant with her second child earlier this month, largely because the royals couldn’t keep it secret any longer. They knew they had to tell the public the truth if they wanted to avoid the backlash after Kate pulled out of all her scheduled appearances, but alas, the backlash still came.

See, the problem is that Kate Middleton [and to some extent, Prince William and most of the rest of the royal family, excepting Queen Elizabeth and Prince Charles] is notorious for maintaining a very light workload throughout the year. I mean, what did she even do before Prince George was born? She went on vacation for a few months, she did a few charity events, and she and William usually went on one or two tours throughout the year. Hardly ‘work’, you know? Kate’s faced a lot of criticism over that in the past, and even though she had a proper reason for pulling out of her appearances this time, there are people [cough, Camilla Parker-Bowles, cough] that still think that she could have done more – or that she wasn’t as sick as she claimed to be.

Either way, now that Kate is nearing the end of her severe bout with Hyperemesis Gravidarum, she’s going to have to go back to her regular schedule. According to the Daily Mail, the royals are gently pushing Kate into making a few more public appearances over the next few months, with a royal spokesperson explaining, “There will be engagements in October and November. We just haven’t announced them yet.”

The Mail’s source also adds, “While they will be predominantly living in Norfolk, the intention is for Kate to hop between London and Norfolk while looking after Prince George.”

Yeah, there’s no doubt in my mind that Kate Middleton is being pressured into making these public appearances. Kate may be feeling better now, but the pregnancy really starts kicking in during the second trimester. That means that she’ll start gaining weight, getting bloated, and growing a bigger baby bump – and she hates being seen like that. But then again, what is she going to say, ‘no’? She can’t refuse the royals, and she knows it. Plus, they have a major PR crisis right know considering the public’s generally low opinion of the royals, and the only way they know to fix it is to trot out Kate, George, and Kate’s fashion.

Update: Kate Middleton is still avoiding public appearances due to her ‘hypermesis gradidum,’ according to Clarence House, the official media out let for the royals since Prince Charles shut down Prince William and Kate’s own media voice!

The official statement: “The Duchess of Cambridge was unable to attend today’s The Art Room engagement as she continues to suffer from hyperemesis gravidarum.” Do you buy this? If the princess is so sick why isn’t she in hospital?