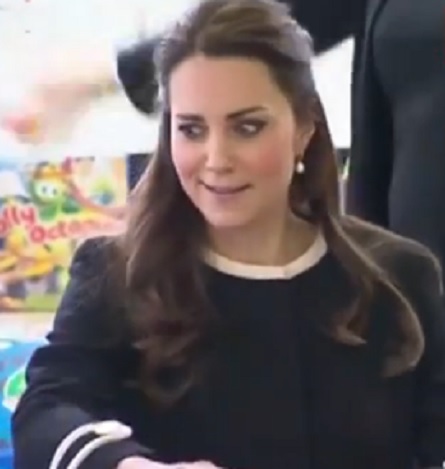 Kate Middleton visited a children’s charity during her NYC visit on Monday and during a present wrapping activity gave a glorious side-eye roll after a passerby instructed her to “keep wrapping!” As we all know, an eye roll is one of those actions that has the power to convey A LOT of information. While the lovely princess probably wasn’t trying to convey anything other than a playful WTF, the viral video of her wandering eyeballs has been interpreted countless ways. And, given the “un-royalness” of Kate’s gesture, there’s no doubt Queen Elizabeth is doing a bit of eye-rolling of her own.

This all went down at the Northside Center for Child Development in Harlem. All seemed to be going according to plan, and we all thought royal karma had been restored to balance after the LeBron James imma-put-my-sweaty-arm-around-the-princess fiasco, but then Kate Middleton was quickly put in her place by an unseen individual who shouted “keep wrapping.” I’m sure the command was all in good jest; however, that’s probably more directness than this royal has ever heard in her life! After the brilliant side-eye, which will forever be stored on a gold pedestal in the vault where glorious celeb fumbles rest, Kate continues on her Merry Christmas way. What did you think of Kate Middleton’s side-eye glory?

The Queen though. You know Queen Elizabeth watched Prince William and Kate Middleton like a hawk as they toured around America. All of the Royal Tour USA fumbles are sure to give her heart palpitations. Do you think she’s going to give them a royal lecture when they return home about the Kate Middleton eye roll? Or do you think Queen Elizabeth’s getting tired of commenting upon their (namely Kate Middleton’s) every move, misstep, and royal blunder?